END_OF_DOCUMENT_TOKEN_TO_BE_REPLACED

CNet has a slide show with it’s top Windows programs. It’s a pretty good list. I’d agree with it for pretty much everything. What I found really interesting is that of the 9 listed, 7 are open source. Here’s the rundown with the license for the source of each:

Interesting to see the penetration of open source here.

ComputerWorld has a rather good showdown of email clients on Mac OS X. The best breakdown of features I’ve seen on the Mac side in some time.

That said, I think they were slightly unfair to Thunderbird. For example, Thunderbird does have calendar support via Lightning which wasn’t mentioned (though it does indicate webmail support via extension). I’ve been using it with Google Calendar and it’s been working very well for me. It also says that Thunderbird can’t read from the Mac OS X Address book, though it should be noted that’s now fixed for the next release. It does however in another part of the breakdown briefly discuss Apple’s upcoming Mail release.

Another interesting note is that there doesn’t seem to be any mention of Entourage still not being available as a Universal Binary, meaning it’s very slow on Intel based Mac’s as I’ve mentioned before. We won’t see it as a Universal Binary until 2008. As someone who uses it daily at work, I’m counting down the days. IMHO this problem alone makes Thunderbird a much better mail client (minus the lack of Exchange support).

Does anyone know if Mail supports exchange? The review seems to think so (see the chart), though I thought that was only over IMAP. Apple seems to agree with me (emphasis mine):

Mail works with the following account types: POP, IMAP, .Mac, and Exchange (only if configured as an IMAP server). You can’t log in directly to Hotmail, AOL, or any service that does not support POP or IMAP access, and retrieve email using Mail.

I wouldn’t really call that support.

Other than those things which I believe aren’t quite accurate, I actually liked the review. I though it was a decent breakdown on a level I haven’t seen before. It exposes features that few really look at (search for example), but really matter in terms of user experience.

Someone created Mobile Terminal for the iPhone. That means one could in theory run SSH. Awesome.

Microsoft yesterday released Remote Desktop Connection 2.0 Beta for Mac OS X. This is the first release since 2002. The current version was really old, clunky and limited compared to it’s Windows counterpart. Worse was the fact that it was PPC native and was never turned into a Universal Binary, making it just that much slower. This is a really welcome upgrade for all Mac users in a PC environment. Unfortunately it’s still missing key things, but it’s still beta so there is still hope.

I’m primarily a Mac user at work, but do work on a few PC’s as well, so I have RDC running constantly since I find it easier than hitting the KVM switch all the time. No, I don’t use Parallels as of yet. This works pretty well for most tasks, but on occasion when I need to do more intensive PC work I do switch over using the KVM for the time being. Because I work like this, I switched to CoRD, which is an open source Remote Desktop implementation. I’d highly recommend it. It’s very good.

RDC 2.0 has a really nice new look, and much improved performance for Intel Mac users. It does however have some issues that still aren’t addressed.

Notice in the menu above, you can’t make a “new” connection. Only open a saved one. I can’t for the life of me understand why this is. Do I really have to plan my connections in advance? What if I’m connected to a computer and want to quickly connect to another? The only way I can find to get a prompt for a new connection is when you don’t have any connections open. This just doesn’t seem right.

With CoRD I can easily add a new RDC connection using the quick connect box, or by adding it to the tray. This is in my opinion essential functionality. It’s so easy to manage connections in CoRD. IMHO it’s the greatest feature this application provides. 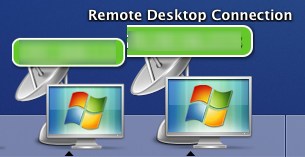 Having multiple connections open in RDC 2.0 gives multiple dock icons with the address of the host in the icon. A rather nice way to tell who you’re connected to. There is a bug however which results in one looking cut off on my PPC Mac Mini, not sure about the Intel one (maybe lack of Core Image support at fault?). One downside to this design is that the dock can get pretty cluttered quickly if you have a few connections open. But in my case it’s never really more than 2, so it works well for me. 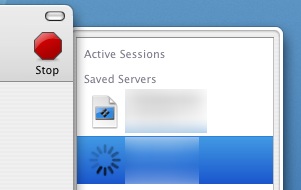 Switching between computers in CoRD 0.4.1

CoRD uses a “tray” like interface for managing connected an saved connections. This means no connection files sitting all over your computer (yay!). It also means switching between connections is really easy, even if you had a dozen, and it doesn’t clutter your dock. It’s great interface.

New to RDC 2.0 is Full Screen mode. Something that was missing in prior versions (and really hurt). CoRD also has this feature. This is one place where both applications have shortcomings. In RDC 2.0, if your resolution isn’t ideal for your display, it crops and looks really poor. In CoRD if you are using a windowed view, and go full screen, it disconnects then reconnects to go full screen. This is a real drag. There is however a workaround for CoRD. The trick is to start full screen and exit if you want to use it windowed. CoRD then seems to scale down the resolution but maintain the same connection. Despite scaling the fonts are still very readable.

I don’t think CoRD can map drives though. That’s a pretty nice feature.

Overall I think I’ll be using both applications depending on the tasks at hand, but I think I still prefer CoRD.

For anyone wondering, Entourage on an Intel Mac isn’t bad. Can’t wait for the next release where everything is a Universal Binary. PowerPoint is dead to me until that upgrade.

Not too long after Sun put some resources into giving OpenOffice some Mac love, OpenOffice for Mac is finally becoming a reality. It’s great to see this happen. There are a fair amount of serious issues, and I wouldn’t recommend running it yet, but keep an eye out. This can really change the office productivity landscape.

So I downloaded and tested out Coda a little bit today. My initial impression is that I’m very impressed. It could be the new standard. A few like Alex King point out that it uses Safari as the default engine. I don’t think that’s so bad. Nothing stops you from using 2 windows one being Firefox (obviously running Firebug). I think the editor itself is rather well polished and very refined. The use of Bonjour to allow for collaboration makes it perfect for multi-developer environments. And yes, you can have more than two developers collaborating in 1 document.

My typical workflow is very abrupt. I tend to have Firefox, IE, and an IDE open at all times when coding pages. Not to mention a KVM switch to go between platforms. This still consolidates several things, and with a much nicer UI.

I’ll need to try it (for actual development purposes) for a few days before I could tell if it really works as well I hope. Panic is one of my favorite Mac developers. Really well polished products are their specialty.

CNet’s review pretty much sums up my feelings on Vista after playing around with it for a little while:

The bottom line: Windows Vista is essentially warmed-over Windows XP. If you’re currently happy with Windows XP SP2, we see no compelling reason to upgrade. On the other hand, if you need a new computer right now, Windows Vista is stable enough for everyday use.

I don’t see a reason to upgrade. There’s nothing I really want/need in Vista that I’ve seen. Aero is a giant waste of battery life on laptops, not to mention it’s GPU hungry. So I don’t see my laptop enjoying that. Then there is the issue of all the DRM, and “security” (aka annoyances) they built in. Not to mention the added cost of upgrading older software to work with Vista. XP seems to do the job just as well as Vista does. Oh yea, it’s not exactly priced to sell.

Perhaps by Vista SP1 there will be some compelling feature or benefit. At least for now I don’t see what the big deal is.

On the other hand, I’m somewhat impressed by the Office 2007 release. In my opinion it’s much more polished than past releases. I’m still using Microsoft Office XP (2002) since there was nothing in subsequent versions worth upgrading for. This one may be worth getting, though I’ll likely wait until they shake the remaining bugs out and it’s a bit more used in the real world. I have a feeling corporate adoption may be a little slower due to the UI changes. This upgrade may require some retraining of employees, and I’m sure many companies won’t be into that.

I have iWoz autographed by Steve Wozniak. Do I need to get a signed copy of Vista Ultimate?

If I were to get that, Steve Jobs would need to sign a copy of Leopard or I would have trouble sleeping at night.