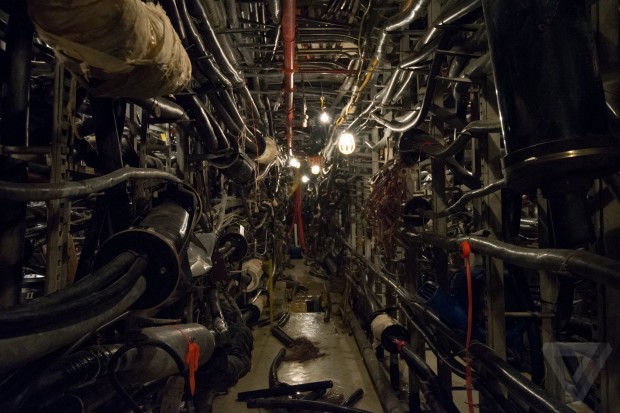 The Verge has an interesting article, video and photo essay on the repair efforts at Verizon’s Broad Street facility after Hurricane Sandy. It’s amazing to see the mess of copper. Sadly, even before Hurricane Sandy this was hardly awesome infrastructure, it’s generations old copper. The upside is it’s now being modernized, the downside is that this is a real drag for anyone who relies on that facility.

So more is coming out about the next iPhone, which we all know is going to be 3G. Someone found evidence of it in the recent update to the iPhone SDK. The SGOLD2 chipset will be replaced with the SGOLD3, which supports 3G networks (as we all expected). Looking at the specs some interesting things come out:

Walt Mossberg initially said this is going down in 60 days, but now he’s retracted that statement. I still think a June timeline sounds about right. WWDC 2008 is June 9-13, 2008. Sounds about right.

It’s well known cable modems are “shared bandwidth”, meaning if everyone on your neighborhood is downloading Paris Hiltons latest video off the net (ahem… her music video), your connection slows down. Well Comcast’s feature for the past several month allows you to briefly use the excess bandwidth when it’s quiet. So what does it look like at 1:30 AM?

During peak hours it’s really not that much worse. Typically between 7000kbps – 14000kbps. Not to bad. Of course Verizon will eventually roll out 15Mbps sustained with 2Mbps upstream. Comcast just announced “speedburst” for upstream, and it doesn’t really compare to Verizon’s Fiber offering. DOCSIS 3.0 can’t come quick enough.

I keep regular backups of everything on this server just in case something happens. Recently I switched to a more automated and secure (PGP encrypted) solution for this blog due to it’s fast-paced nature. Just the critical stuff (database, media, templates). I choose PGP (implemented using GPG) since it’s easy, and I only have to store the public key on the server, making it safer than most alternatives.

I’m strongly considering moving it all eventually over to Amazon’s S3 storage. At $0.15 per GB-Month of storage used and $0.20 per GB of data transferred it would be very affordable to keep backups in an even more secure fashion. I’d still use my own encryption on top of theirs for extra security. For things like media, I could even see myself hosting it solely at Amazon. It just seems like that may be a more practical and scalable approach.

Unfortunately until either FTTH or DOCSIS 3.0 comes to town, it doesn’t look like Amazon’s S3 will be practical for home backup purposes. This server has a beefy connection to a few large pipes to the internet (Level3, Global Crossing, and Cogent last I checked). They provides high speed connectivity so a backup would take only a few seconds. At home with a cable modem on a DOCSIS 1.1 network (such as Comcast) the bandwidth is just to slim to allow enough upload capacity. Comcast still only allows 384kbps up. Even the top plans in select areas don’t top 1Mbps. Of course these are Comcast’s numbers (the actual performance is often less). In areas that they currently serve, Verizon FiOS (FTTH) is available at 15 Mbps/2 Mbps. Much better suited for such purposes (though more would be welcome). As strange as it may seem pricing is quite competitive, giving cable a run for it’s money. Perhaps one day DOCSIS 3.0 will appear, though that seems to be a while away. Perhaps one day all homes will have 100Mbps full duplex connections with low latency.

The only real way to get around this limitation is to perhaps use rsync to perform backups. Initial backups would still suck, but after that it wouldn’t be too bad. Though that wouldn’t work with services such as Amazon’s S3, which are token based. There is an rsync-like clone, but it’s still not the real thing. Perhaps Google’s upcoming GDrive will be cool enough to allow the use of rsync over SSH (I could dream) in addition to WebDAV (which is what I expect to see). Last I checked rsync doesn’t support WebDAV because WebDAV is done over HTTP. If I understand it right, RFC 3229 would add Delta encoding support to HTTP, making something like rsync over WebDAV possible since it uses delta encoding.