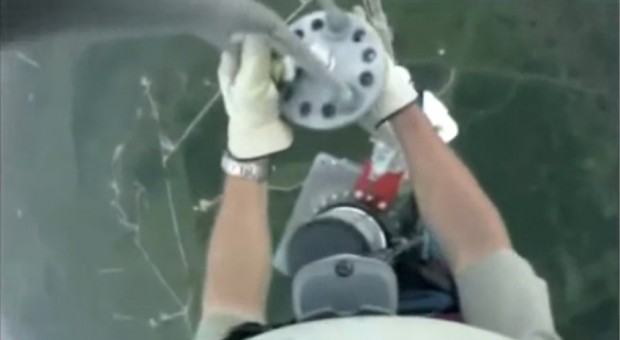 I’ve seen this video a few times over the past few years. Each time I’m fixated on it. I find working a ladder changing a few lighting fixtures to be pain in the butt. This is nuts to me. Worth noting no safety lines when climbing.

Wired has an interesting article on the use of glow in the dark paint on roadways. It seems like an ingenious way to cut power consumption for street lights. I’m not entirely sure I really get the point of the temperature sensitive warnings though. The road getting icy when cold is generally common sense. It seems like it would be better if cars were just required to display outside temperature and perhaps have an audible alarm when it drops below freezing. The cost of this in a modern car would be relatively low as the electronics needed are all cheap. The added benefit would be both a visible (dashboard light) and audible (tone) warning.

Jabra, the company known for their mobile headset did an interesting survey of driving distractions. We’ve all seen a ton of these in the media over the years, generally we know that pretty much everyone eats at least occasionally while driving (72%). We also know people talk on the phone. We know some even text while driving (28%). Some even play video games (5%). The winner however is this little gem:

29% of respondents admitted to kissing others while driving, whereas a smaller, but surprising number (15%) said they’ve performed sex or other sexual acts while driving.

How about a public safety campaign to help bring this closer to the number playing video games (5%). I propose the following slogan: “Pull over before you pull it out.” Poster designs welcome.