Davies says the camera is a Vision Research v642, which shoots high-def video and is regularly used to cover baseball games. But last night’s was specially modified by a company called Inertia Unlimited to shoot at an extra high frame rate and customized to use a Canon 200 mm 2.0 lens that allowed for an extra stop or two of light.

Physics of Baseball has a few GIF’s demonstrating just how awesome this really is. I’d love to see this demonstrated even beyond baseball. I’d imagine Football, Soccer, also being quite interesting to see. A kick at that speed and detail for example. 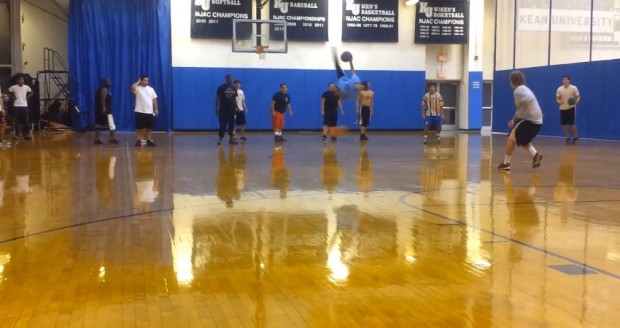 Here is perhaps the greatest dodgeball move ever. This is part of why I think Dodgeball needs to become an olympic sport.

I think it’s time to see Dodgeball in the Olympics. If dressage is an Olympic sport, I just don’t see how dodgeball shouldn’t be.

Somewhere between 15-20 per team and no more than 10 balls between them. Team with last man standing wins. Headshots valid (mixed on this)?

Dodgeball has it all. Strategy, strength, quick reaction, flexibility, good throwing arm, and obviously teamwork. Also, lets face it, this would be the most entertaining thing to watch. It’s fast paced, makes for great replays, and is guaranteed to be something you can’t blink while watching. It can be played indoors meaning it can be a summer or winter sport. You can even reuse the same space used for indoor volleyball if it were done in the summer.

Perhaps it’s time for a public campaign to get dodgeball in the Olympics. I think it would be a fantastic addition1.

1. Of course I’m also for adding a great white shark to water polo.

An interesting piece on Halloween paranoia in the WSJ notes:

…that there has never been a single case of any child being killed by a stranger’s Halloween candy. (Oh, yes, he concedes, there was once a Texas boy poisoned by a Pixie Stix. But his dad did it for the insurance money. He was executed.)

Regarding the sharp objects in Halloween, it’s a very rare occurrence (at best). Part of the reason is it hardly goes unnoticed before someone eats it for obvious reasons. In almost all cases the reports are a hoax. Of all the sharp object in food injuries only about 10 caused injury since 1959, none serious.

Now compare 10 injuries since 1959 to the following from the, the CDC:

As people’s participation in organized sport activity increases, so does the rate of sports-related injuries. Recreational activities, including sports, account for an estimated 3.2 million visits to emergency rooms each year for children aged 5-14 years. Injuries from organized and unorganized sports account for 775,000 emergency room visits annually for children in this same age group. Sports-related injuries are the leading cause of emergency room visits in 12-17-year-olds.

A child is much more likely to die or suffer a life altering injury playing sports or in gym class than from eating candy on Halloween.

To kill the idea of child molesters having a field day on Halloween:

Satistically more kids are abused by a parent or close family member. It’s also worth noting that cases of a close relative being the abuser are generally thought to be underreported.

It’s interesting how paranoia, misinformation and people’s inability to think rationally on their own have such a strong impact on society. An entire holiday is feared for nothing more than urban legends and misconceptions.