I had the Apple WWDC keynote going in the background as I always do so I can follow the madness as it happens. Overall not terribly shocking. The biggest surprise just came a few weeks earlier than I thought.

So the big news in the MacBook world is that they are getting rid of the removable battery in the 15″ model in favor of the 17″ style non-removable battery. A little faster, SD card slot (I guess some people really care about this), and finally going to officially support 8GB RAM across the board. In my opinion supporting 8GB RAM is the biggest improvement. RAM limitations seem to be more problematic than CPU limitations. With Snow Leopard (see below) heavily taking advantage of multiple cores and 64 bit computing, extra RAM won’t just be a luxury, it will be a requirement. There is a reason 4GB is the minimum RAM across the board now. I said months ago they needed to do this.

The one downside I see is that the MacBook and MacBook pro line is being blurred quite a bit. The real difference at this point is the graphics chipset. For average users the MacBook will be more than enough. If you’re a power user, the MacBook Pro will be your laptop. With Snow Leopard taking advantage of the GPU for computational purposes, having a good GPU is just another performance boost.

Mac OS X 10.6 as John Grubber aid might be a tough sell to consumers. It’s not very feature packed, at least as far as users are concerned. Most of the changes are under the hood geared towards taking advantage of modern hardware, removing cruft from years of API and design iterations. That’s not going to easily convince consumers to spend $129. As a result for Leopard users it’s $29 (family pack for $49) . That’s a good decision as explaining the advantages of rewriting the Finder in Cocca to an average user won’t be easy. I think the biggest actual feature it has going for it so far is Exchange support, which I don’t think will do too well outside the business world, which was never Apple’s strong point.

On the technology side, I welcome our 64 bit overlords. GrandCentral and OpenCL should really help make software faster, and take advantage of the hardware. This will hopefully spur some innovation. The downside of course it that working the GPU for basic application performance will compromise battery life. Right now it’s easy to conserve battery life by avoiding games which tax the GPU to save battery life. I don’t really know if having lots of apps tax the GPU is really going to help or hurt in that regard, or if there will be a level of user control (turbo mode). My only concern is if the GPU is doing extra work, and isn’t well optimized for power savings, this could get troublesome.

Mac OS X 10.6 Snow Leopard is also Intel only. The PowerPC is officially dead now. Kinda stinks for PowerMac G5 users whose computers are still pretty speedy and were expensive, but it’s essential to keeping development sane and forward moving.

Apple’s pricing of Snow Leopard is also going to speed adoption and let developers focus on developing software for 1 OS on one architecture as opposed to multiple OS versions on 2 hardware architectures.

Lots of new features, developers have lots of ideas in the works, ships June 17th. Free for iPhone users, $9.99 for iPod touch users. No surprises.

The only interesting software notes are that TomTom will be releasing a turn-by-turn directions app. I expect this to be rather popular as long as it’s not too expensive. There’s also a “Find My Phone” feature for MobileMe customers that is pretty much the “locator” button on your cordless phone and emits sound regardless of your iPhones settings. Kinda handy, useful if you frequently misplace your phone.

Also interesting is AT&T won’t be supporting MMS next week when iPhone OS 3.0 launches. They will start supporting it later this summer. Tethering is also still in the works. This is sure to upset many people. According to Boy Genius Report the MMS delays are due to administrative issues, while the tethering issues are due to the plan still being in development, though I’m guessing they also have concerns about network capacity in NY and SF.

This is pretty much what was expected. I think the biggest feature is the camera. The digital compass will be handy for a few people, but for most it will be a pretty meaningless thing.

Until a significant market share is using the 3GS, I question how much developers can take advantage of the extra performance without making their apps useless to the 3G and original iPhone users. This might be a limiting factor.

The bigger news is Apple is keeping the 8GB iPhone 3G as a lower cost option. Apple had to keep the original 3G iPhone on the market to keep growing users during the current economic recession. This is good for growing users… but bad for those who want to keep the user base on the bleeding edge. Those new 3G users will be locked into contracts for 2 years. That means at least 2 more years before the iPhone 3G starts to fade out, not 1 more like most were expecting. I think for many people, the 8GB iPhone 3G is actually the better buy.

If you’ve held a unibody MacBook and a previous generation , you know the new unibody is a substantial improvement on an already solid frame. Even with that knowledge I’m surprised to see these pictures of a MacBook that survived Turkish Airlines Flight 1951 which crashed outside of Schiphol in February.

Noteworthy is that rather than a sharp bend in the frame which would have cracked the motherboard and potentially crushed the hard drive it instead only bent a few degrees. It looks like the board stayed at least mostly intact, at least enough to boot. The display is pretty busted but that’s to be expected. 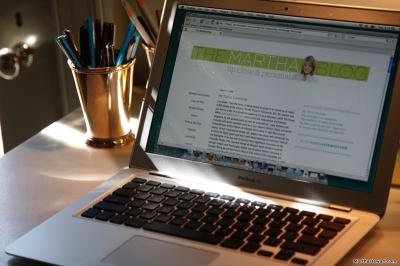 The other day, Martha Stewart blogged about her MacBook Air, which seems to have been picked up by a lot of tech blogs. It’s not really news that she’s a Mac user. She’s been seen among many Macs before. She’s got an iPhone too. She does use a HP laptop as well including an HP touch screen in the stable, very appropriate I would say. As she explains:

I also use an HP laptop on a regular basis because I like to be well versed on both platforms and be able to multi-task.

What I did find interesting is that if you look at one of the pictures (you can find a larger one on her blog post), she’s running Firefox. Safari is also running but no windows are visible.

Yes, I do love Firefox, great browser! Oh, and I also like the program Picasa to store and organize my photos. The computer I use for that is a Sony VAIO laptop with a 250GB hard drive and a 17″ screen. It also has a built in HDTV tuner and I will try to snap a picture of it soon! Perhaps I will have one of my cats near it.

Could it be she watching her analytics that closely?

Image via The Martha Blog