No kidding. Vista’s lackluster launch just made it look that much better. Almost 20% upgraded to Leopard. That’s pretty impressive. Especially considering it’s only at 10.5.1. Most don’t like upgrading until x.x.3 allowing for some bug fixes to be released first. Other than that, pretty uneventful.

Time Capsule is pretty cool. Essentially just an Airport Extreme with a hard drive. Personally I would have liked to see it as two separate devices. So you could easily use it with any network, and plug into an existing Airport. It’s described as containing a “7200-rpm Serial ATA server-grade hard disk drive”. It will be interesting to see what that really is when people dissect them. Most interesting is $499.00 for 1TB. Considering it’s an Airport Extreme + 1 TB storage, that’s a pretty decent deal. I still like my solution better. Customization allowed and more redundant. Time Machine is awesome, so I’d suspect this is a great easy way to backup. Now why can’t apple get Time Machine working over SMB/CIFS?

Sales were awesome, SDK still in the plans for late February. Maps with geolocation! Awesome in a big-brother-ish sort of way. Exceptionally awesome considering your iPhone can now be strapped to your dashboard [insert Mac/Dashboard joke here] and used as a GPS device. That’s a lot of value right there. Don’t forget it’s Google Maps too.

For just $20 you can be more like an iPhone and have mail and other iPhone apps! Or you can just use the hacked firmware. Despite the gain, it still feels like the iPod touch is the redheaded stepchild. 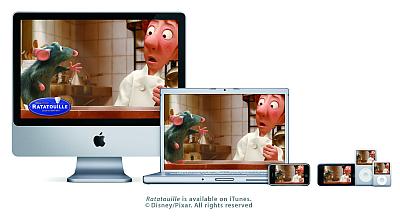 Awesome. Everyone knew this was coming, and now that it’s here: sweet. What makes it great is all the major studios are participating. Finally something they all can agree on. Unfortunately only becomes available 30 days after DVD release (suck). “Library” title is $2.99, new release is $3.99. Up to 30 days to watch, once watching must finish within 24 hours. Not bad. I expect in 12 months that 24 hours will extend to at least 72hrs.

A big thing stressed is that it goes across devices. You can watch on your TV (via Apple TV), computer, or iPod/iPhone as the image above demonstrates. 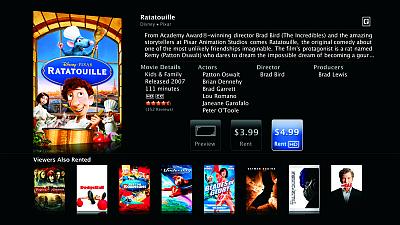 Sounds like new hardware, but like the iPod, the Apple TV announcement is just software. Pretty much, a computer is no longer required. Can rent directly from the interface (which has been revamped). Still no 1080p, a major gripe with many potential buyers. Software available for existing owners (cool). Small price reduction also announced. I still wonder why they didn’t introduce a 1080p at a higher tier and give people the choice. Look at photos, videos all on your TV without using a computer. Very cool.

What words should be used to describe the MacBook Air? **** awesome? Yea, that about does it. At 3.0lbs, and only 0.74 inches thick, how can you not be impressed? 1.6GHz or 1.8GHz Core 2 Duo. That’s not a Celeron or some other watered down processor. It’s the real thing. 4200 RPM PATA drive, or SSD. PATA and your going to feel sluggish with high IO activities, or solid state (SSD) and you’ll be speeding but broke. Even Steve admits it’s expensive. What a dilemma.

The micro-DVI port is a great touch. A 2nd USB port would have been nice, but considering it’s an ultra portable, no problem with only 1. ExpressCard would have been a major win. I would expect 2nd generation will include one as I’m sure it will be a major gripe among users. Intel GMA X3100 graphics processor was a good choice as well. That brings a good balance of performance and power consumption. Beautiful display. It has an audio out port, but no input. Audio in would be a nice addition, but you could use bluetooth or USB for that, so again not a deal breaker. Lack of a removable battery will cause some to be upset. I’m mixed on that. Not sure if I’d sacrifice size to add in the extra hardware to allow a battery to be secure yet removable on the undercarriage. 2GB RAM on board is pretty nice.

If I were Apple, I’d make a couple of changes:

Apple is seriously pushing this as a workable machine. It’s got a full copy of OS X complete with Xcode. That’s right, you can code on this sucker. How awesome is that.

Awesome announcements despite the lack of new hardware that’s so desired. I think there’s a lot more still coming. I expect the iPhone to get an upgrade soon (3G + more storage) and that will be it’s own announcement. Perhaps even next month with the release of the SDK. I also think we’ll see more hardware at WWDC (Mac Mini, MacBook Pro are up for a revamp by my count).