For those who don’t know, the Festivus holiday is from an episode of Seinfeld titled “The Strike”. The other plot of the episode is Kramer ending a 12 year strike at H&H Bagels where he used to work. H&H Bagels is a NYC institution that actually exists on the upper west side. What better way to celebrate Festivus than togo to H&H Bagels? I couldn’t think of one. 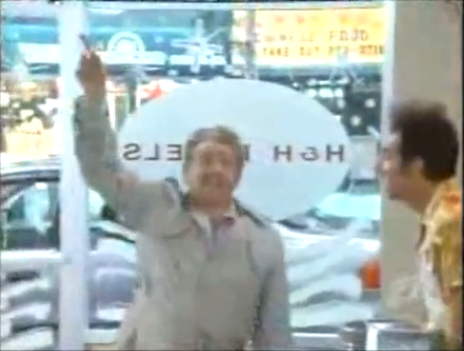 I haven’t been to many of the popular bagel establishments in NYC to compare, so I can’t say for certain if they are the best in the city or not. I will say it was very good and served very fresh. It’s also very likely the first Bagel place I’ve been to with a Zagat plaque on the wall.

This may be a new holiday tradition.

The particular episode in question is Season 9 Episode 166 “The Strike”.

If you make a donation, I suggest “The Human Fund”.

From Urban Dictionary via Fake Steve:

Vistaster n. a giant cluster-fuck; a colossal mistake; a turning point, inflection point, or event that, in retrospect, turns out to have led to the doom and demise of a once-powerful company, person or organization.

I think it’s about time to start using this term, so that hopefully it goes mainstream and becomes a new word.

On a related note, Festivus still isn’t in Websters Dictionary. It’s not in Thunderbird’s spell check either. That’s another word I’m lobbying for.

Just in case anyone was wondering, I made the Festivus Pole in this post using Inkscape, which did a pretty good job at making it easy enough for even me to do silly little work, and I’m far from an artist. It even lets me output svg, though I uploaded a png since not all browsers support svg at this point. Thankfully I didn’t have to draw any tinsel, but as we all know, that’s not allowed, since it’s distracting.

For those who are interested in the real thing, there is a video about a company who makes Festivus Poles.

As usual the web has quite a few things out there about this amazing holiday. Just search Google News this time of year, or check Wikipedia’s Festivus article.

There is even a new book on the holiday: Festivus: The Holiday for the Rest of Us.

Frank Costanza: Many Christmases ago, I went to buy a doll for my son. I reached for the last one they had, but so did another man. As I rained blows upon him, I realized there had to be another way.
Cosmo Kramer: What happened to the doll?
Frank Costanza: It was destroyed. But out of that a new holiday was born: a Festivus for the rest of us!
Cosmo Kramer: That must’ve been some kind of doll.
Frank Costanza: She was.

This year, there is quite a bit of media coverage this yet. Yea!

Unfortunately no stores seem to have any commercials that mention it. Perhaps it’s time that change?