First we hear about Flickr’s downfall, now Winamp. It’s amazing to hear how this big companies bought and killed an acquisition by refusing to let them thrive.

In both cases corporate culture ironically killed everything they were trying to acquire. In both cases, they could have been huge, had they been agile enough to stay on the bleeding edge.

For quite some time it’s been nothing more than a few extensions and a new skin on Firefox (you can find them here).

Security updates will only be provided until February 1, 2008. So to stay secure, best bet is to plan a migration away from Netscape by then. 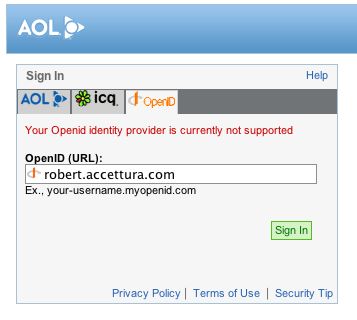 Ok, so 1 business day after I found a few spammed sites:

So there you have it, 3 reports, 2 of which are resolved in 1 business day, 1 other report is still in the works.

I was surprised myself to see the response time.

Edit [3/21/2007]: Riverside, CA has removed the links, and disabled that forum to prevent future problems.

I’ve recently seen an increase in spam around here slipping through the filter. In an attempt to keep this site clean, I keep a close eye on comments. Typically checking several times a day, and removing url’s that are pure spam, or just inappropriate. But over the past several days things have been getting stranger.

Not only is Apple hosting these Spam pages, but so are others including the City of Riverside, California, who links to the Apple hosted spam.

The url’s relevant in this case are below as an image to prevent any Google Juice, as well as unsuspecting clicks. You’ll have to very intentionally type them into your url bar. The contents may not be appropriate for all audiences, who knows what badware lies within. Be warned.

I’ve contacted Apple and The City of Riverside. Lets see how quickly this is handled.

This is likely old, but I just ran across this… The old Netscape FishCam is now the AOL MV FishCam. It also has a blog. I remember reading about that easter egg (Ctrl-Alt-F) way back when.

When I saw AOL’s new Television service (free), I got excited. When I realized that Perfect Strangers was one of the show listed, I did the Dance of Joy.

Guess who is going to be watching a lot of TV reruns (even more than the normal 24hrs a day)?

I had this in mind for a few days, but haven’t gotten to it AOL has a beta of their new AOL Toolbar for Firefox (1.0.6 Beta II). I decided to give it a quick go (it’s available to non-AOL members). While I’ve never seen the use of these toolbars (AOL, Google, Yahoo), for a purpose than blocking popups in older versions of IE, I won’t get into that discussion any further, instead looking at it from a more technical point of view.

It’s actually rather well done, it has a settings window that lets you add/remove (and reorder) items from the toolbar, which appear as soon as you close the window (very cool to see that smoothly happen). Overall it looks like a very complete offering with AOL artwork, and everything. That’s what impressed me the most. I don’t see mail notification, though I don’t know if their IE toolbar offers that either (it does offer the ability to go to mail, and compose message. Also interesting is when you select text, it automatically populates the search bar’s query box, literally as you highlight (it grows as your selection covers more characters).

We now have a Google Toolbar, Yahoo Toolbar and now AOL Toolbar!

Super job AOL employees! Great to see your ensuring your users have access to your services from the browser of their choice. For those wondering (and I’m sure would comment), I’m still not fond of their new email policy, but I do feel it’s important to give them criticism and praise where they deserve it. Remember it’s feedback that lets companies gauge how their policies/products/services are perceived by the public.

If anyone from AOL wants to let me know if there are plans to integrate login based services at all (for example mail so users can tell if they get new messages), feel free to leave a comment or contact.

There’s been a lot of buzz lately over AOL and Yahoo charging to email their customers. I think this quote most likely will end up being the future:

“AOL users will become dissatisfied when they don’t receive the e-mail that they want, and when they complain to the senders, they’ll be told, ‘it’s AOL’s fault,’ ” said Richi Jennings, an analyst at Ferris Research, which specializes in e-mail.

Well said. Just wait until AOL customers realize they aren’t getting order confirmations, notifications, and other email’s because the sender won’t pay.

Another concern not really discussed is the possibility of having a Level 3/Cogent style battle where one ISP refuses to let another email their customers, because they aren’t getting paid what they feel they should.

Right now, email is essentially 100% peered. Everyone emails everyone, nobody charges. You pay your ISP to run the mail server, and that’s it. If commercial entities need to pay to email you, your going to get separate charges. Want an email when your order ships? Pay extra. Want an email when this item is back in stock? Pay extra.

This is a very slippery slope. Just one or two greedy ISP’s is all you need to ruin email. Once you can’t reliably email, the system is dead. Spam can reduce efficiency, but can’t kill email. Remember Email is by far the most used protocol in business.

I doubt this system will do anything to reduce spam for AOL customers. It will however help AOL’s revenue, which I’m assuming is the real goal. A slightly bold move as AOL is assuming their customers won’t mind not getting all the legitimate email they would if they used a free Gmail or even Hotmail account.

There’s also a decent possibility AOL customers might have to pay merchants an email fee when they buy products, to help cover that cost. Of course merchants eventually will sneak in their percentage there, further hiking prices.

Personally, I think this biggest threat is a Level 3/Cogent style dispute.

Should also note there’s currently a lot going on over Net Neutrality. Google’s been thrown into the middle of that, merely because of how ubiquitous the company is. Vint Cerf’s letter on the topic is really a must read. Paying for email right is really just an inverted case of network neutrality. Instead of the middle man dictating who you can/can’t communicate with, the next ISP down the line decides. That’s no better.

The Internet as an open medium could drastically change in the next few months if some of this stuff becomes reality. There are quite a few companies out there who believe the internet is enough of a threat to their business, that they want to go as far as crippling it.