One of the first things that you’ll notice is tabs on top. This paradigm really makes more sense since the tab defines not just the content but the environment it’s viewed (prev/next button, URL bar). It’s also just much sleeker looking. After a few minutes you’ll likely agree this is a better approach than tabs under.

Another nice touch is if you enter a URL that’s already open in another tab, you’ll be given the option to switch to that tab. Perfect for those of us who end up with 50 tabs by lunch time.

It also just feels tighter and less intrusive on the web browsing experience.

App Tabs are a great way to pin sites you use constantly (webmail, Twitter, Facebook, etc.) to your browser and make them easily accessible throughout the day. I suspect many webmail/Facebook addicts will really dig this feature. To use it, right clicking on a tab and “Pin as app tab”. Don’t need it? Don’t use it, it’s not forced upon you. 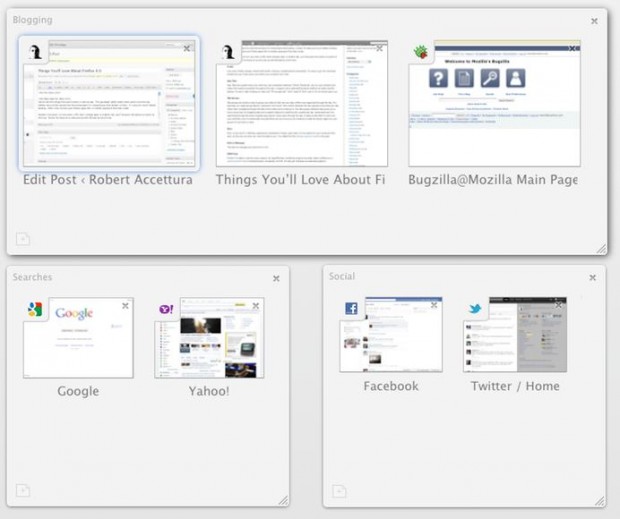 Tab groups are simply a way to group your tabs so that you can stay a little more organized through the day. For example you might group tabs for “personal” and “work” then switch between the two groups a few times per day, rather than navigating through 50 tabs to find what you’re looking for. The tab groups interface also gives you a more visual way of navigating tabs and a search feature for searching for a particular tab. I personally like it for searching through the dozen bugzilla bug reports I have open through the day. It takes a little effort to work into your workflow, and I’m personally not quite there yet, but once you do it seems to really be handy. Again you can ignore it if you feel no need.

The status bar you used to see at the bottom of the window is gone for most people. If you have an add-on that relies on it, for now it will still show (one of my computers still has it). Just another few pixels for web content. It does take slight getting used to for the technical folks who watch the connections as we’ve been used to looking at that bar for 15 years or so. For the rest of you, it’s just more web on your screen to fill with photos of cats and amusing captions.

Like every Firefox release, there’s little polish, cleanup, simplifications everywhere. To many to go into each individual tweaks but you’ll see some, and others you correctly won’t see as unused and outdated options are gone.

Sync is now built-in. Settings, passwords, bookmarks, history, open tabs. It’s encrypted on your computer then sent, so the only one who can view the data is you. I’ve called this the ultimate security model in the past. It’s optional, you don’t have to use it, you don’t loose anything by not using it, other than the ability to sync multiple computers obviously. 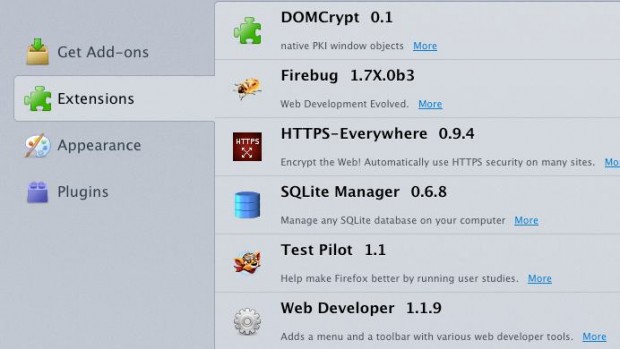 The add-on manager got some love in 4.0.

Firefox 4 is faster in almost every respect. First of all, it seems much more responsive on startup. Its JägerMonkey JavaScript engine has really made a difference in various benchmarks including Kraken, Sunspider, and V8. It also has hardware accelerated graphics. Even on Windows XP, which is still fully supported (ahem).

Out Of Process Plugins (Mac)

Windows and Linux got this in Firefox 3.6, the Mac version was a little behind schedule. Plugins now run outside of the Firefox process. That means when a plugin like Flash crashes, it won’t take out your entire browser. As Windows users will tell you, this makes a big difference in terms of stability.

Simply put it’s a way to tell websites and advertisers that you don’t want to be tracked. It’s obviously up to websites/advertisers to honor the flag.

To enable it go into Preferences and under the “Advanced” tab select the “General” sub-tab and check the “Tell web sites I do not want to be tracked” checkbox.

I’ve discussed WebM on this blog before and won’t repeat what I’ve said before. WebM is an open standard, it looks great.

WebGL is amazing. Check out some of the demos by Mozilla or gathered by the Chromium team.

Take a look at Flight of the Navigator and remember: this is the web! 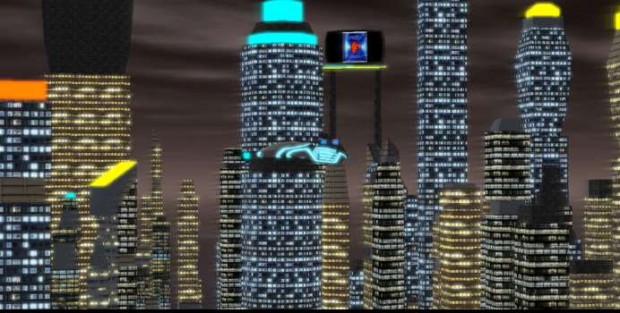 Fix for the CSS :visited hole

Just a FYI, this no longer works.

This replaces the old Error Console and in many ways is almost like Firebug Lite. It’s got some great features like HTTP headers and will make it a lot easier to quickly debug things if you’re using a computer without Firebug already installed. If you are a web developer make sure to take a look.

Do Not Track Header

This is a feature that’s been in the news quite a bit, and mentioned above. When enabled all HTTP requests will include the following header:

A HTTP header to tell browsers to only use HTTPS to communicate with the site. As more sites start to switch to HTTPS this is a great way to mitigate some potential attack vectors.

If you’re a web developer or designer you’ve likely tried to do this before using images and realized how much it sucks. Now you can do it with the simplicity of CSS.

Do calculations to determine the size and shape of an object. I can’t tell you how many times this would have been realy helpful.

Forms in HTML5 are pretty awesome. I won’t go into detail on HTML5 forms here, but you should check them out.

Exactly what the title says. I suspect this will result in some really cool things over time, and some really pointless things that we’ll still find amusing.

Of course that’s not all, just the stuff I really find to be the most interesting.

You can also save space on the top bars by placing buttons on weird places, like the tab bar (!).
Some buttons will change theirs appearance depending on whether you put them (like the ” ” button to add a new tab, or the reload/cancel buttons next to the right of the URL field).
Is there a comprehensive list of those tweaks?

The RSS icon has been replaced by a real button that is not displaye by default, sadly, but it is there.

My main reason for not using FF was the excessive memory leakage. On both Windows XP (forced by work) and Mac OSX the memory usage sometimes rose to around 700 Mb. Even with just a couple of tabs open. Is this fixed as well?

I noticed that the app-tabs also gets highlighted when the page changes. So you get notified of new tweets, mails, etc. it seems (I only tried it on Twitter).

Funny how all those changes feels like Chrome to me. I guess it’s the natural (and best) evolution path for browsers.