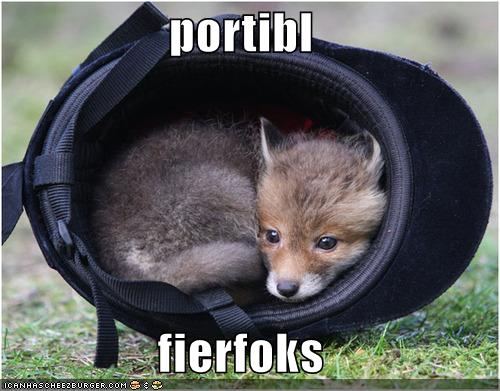 [Via: I Can Has Cheezburger]

CNet has an interesting article up on Smart Drives. They are similar to USB Drives, though:

They developed a technical specification that lets consumers carry their entire desktop, including programs and personal preferences, with them as they travel between home and office. The specification even allows users to launch software and remotely access data on any Windows XP or Windows 2000 PC.

Will it take off? So far supporters include:

eight hardware manufacturers and 32 software companies supporting the U3 spec, including RealNetworks, Skype, TrendMicro and the Mozilla Foundation.

It’s a really interesting concept, and something I’d really like to get my hands on. My only gripe is no word on cross platform support. My ideal drive would allow me to have data on any platform, and put binaries for each platform I want. So I can put my Mac Firefox, and Windows Firefox on there. And no matter what computer I use, I’ve got Gecko.

This technology would be great for allowing users to always have their prefered browser with them, regardless of what computer they use.

Still early on, but I hope they think about cross platform technology. Looking at technologies that took of, and those that didn’t, it’s clear cross platform is important. People don’t like the idea of needing specific requirements to use something. They just like to go. That’s why USB took off. Most devices work on any computer, and platform. I can take just about any mouse, and plug it in on any computer, and it will work. It’s why Apple’s ADC monitors were silly, but VGA, and DVI aren’t. It’s why Firefox is a wise business move. Why not have one browser for all platforms, rather than IE for Windows, Safari for Mac, Mozilla for Linux. But I digress. Cross platform functionality is important.

I’d love to see such technology in servers as well. It would be great to get zero config networked computers in a home. With many people having several computers in their house these days this is a big problem. Set up a wifi network, use one computer as a server, and let people login and access their files and programs. Essentially the server is just a disk (just like a USB drive).