My predictions, like many others were mostly off. So here’s my observations of todays festivities and announcements.

The iPhone is an amazing product, and looks to have a ton of potential. Jobs specifically notes that it’s running OS X. This is somewhat peculiar, and raises several questions: 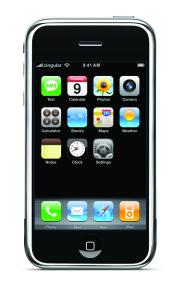 Then there’s the VoIP factor. This phone supports WiFi (802.11b/g), so what stops someone from installing Skype (presuming third party software works), and buying a years worth of unlimited nationwide calling ($19.95 until the end of the year). Then whenever in a HotSpot, enjoy the free minutes? Will the phone be crippled? Or will it be as cool as I’d hope it would be. Cingular doesn’t have anywhere near the history of crippling products as Verizon has.

Perhaps when I’m looking for a replacement of my CU500, they will be at the 2nd or 3rd gen of the iPhone. So by then >2MP camera, 802.11n, and ideally a clear picture on what can/can’t be done with this phone. I hope Cingular’s data service comes down in price by then. That mail client sounds awesome.

You can see how the size stacks up at Gizmodo and view some ‘candid’ pics here. It really isn’t as large as the initial pics made it look. Slightly larger than the current iPod, which millions carry quite gracefully.

It looks like an awesome product, but I want to know much more than Apple’s letting us know thus far. Hopefully details emerge quickly. I know eventually it all comes out. Hours after they ship, dissection photos will be online for us all to analyze.

The Apple TV (forever iTV in my mind) looks like an extremely cool device for the TV addicted (like myself). Though I still have some questions on this one too:

I also presume this device isn’t the best on an 802.11b/g network. This just screams for 802.11n. I can’t imagine this working with my current network, and I have decent bandwidth. Unless of course it’s more efficient than I suspect.

The Airport Extreme wasn’t mentioned during the keynote , but still updated. Less UFO like, and otherwise looking like another generation of cool WiFi goodness. It’s the first 802.11n I wouldn’t mind having. Note it supports remote storage (via USB drives), while not as robust as a file server, should prove pretty useful. Also USB printer sharing (as usual). The biggest advantage is Apple’s rather robust feature set and compatibility they are known for. Still doesn’t support UpNP for anyone wondering. At $179, it’s not even to expensive. Though you still need to upgrade your systems to 802.11n to take advantage of the speed.

Apple played The Beatles “Lovely Rita” during the presentation, leading Wired to say the Beatles catalog will soon be on iTunes. I’m not sure if this is true (some think it’s not), or if it’s just a 2007 reincarnation of Sosumi Perhaps you need to be a semi-apple-geek to think of “Sosumi” within a nanosecond of the Beatles being played, but that’s what I am.

I still believe that the following will be marked by more low-key releases over the next few months:

I personally believe there is substantial evidence to back these based on news leading up to todays announcements.

As if it isn’t obvious, I love this stuff. A trip to see the gear once it’s in the Apple Stores may be required at some point (looks it will be a few months to see the iPhone though). You can likely tell I have a slight hardware-obsessed, software/web developer centric view on this whole thing on top of my love of Apple products.