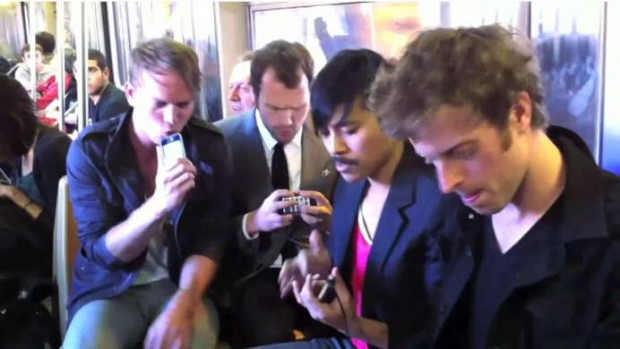 Here’s an interesting video that went viral over the past few days. Brooklyn based band Atomic Tom’s instruments allegedly were stolen. Their resolve led them to use their iPhones and film a music video on the subway using their phones as instruments. Or so the story goes. I’m not sure if it’s a viral sensation or viral marketing.

I’m a bit skeptical about this one. They claim it was one take, multiple cameras were present, iPhones were the sole instruments used. I don’t have the time to analyze it close enough, but the sound is a little questionable. The thing that really gets me is the quality of the vocal track. While you can hear some ambient subway noise in the background it’s hard to imagine the phone picking everyone up so clearly when they are all singing given the position of the microphone and pick up so little subway noise otherwise. The iPhone does try to reduce ambient noise as much as possible, but this just seems to be beyond what it would do. Of course they could have done a little post-production work there. They don’t really say what post-production entailed.

Playing an iPhone instrument for the length of a song especially given their performance also seems a bit difficult. All four not messing up would be impressive, especially on a moving train.

Regardless, this little viral marketing seems to be working. Over the weekend it’s views were still in the thousands. It’s clearly on the way to the 2 million mark as of this blog post.

At least one of the apps used is iShred: Guitar + Effects, which is pretty cool.