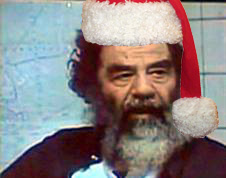 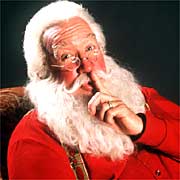 This concludes another fun with photoshop

Saddam, is really Santa 1000 years ago (“Saddam is arabic for “Santa past”). Evil Bin Laden, trying to steal Christians Christmas (remember this is a religious war), went back in his time machine he stole from the Iranian government. He captured Santa from the past:

and brought him to the future.

If Santa today, encounters, past Santa… Santa as we know it will cease to exist:

The dark secret is that he and Michael Jackson, are both known for touching young children in the dark of night… A chimney isn’t the only narrow passage Santa has been in.

Reflections
IMHO, would have been a lot better if he was captured like his sons. Dead with no mess. Now we get to hear years of disagreement over what to do with him? UN Trial? US Trial (Gidmo? Death Penalty?) Future Iraqi Trial? Who holds him?

Not to mention retaliation from resistance groups. A dead Saddam would be a better Saddam. Would save a ton of time and money.