Gizmodo wants electronics to have standardized labeling to make things easier to compare. I suggested something along these lines back in 2008 about energy efficiency. Their proposal is a little more broad though I like it.

Recently I tried to get stats on power consumption for a product from a decent sized manufacturer. Interestingly their sales and support team didn’t know how much power it consumed. They didn’t even know where to get such information and suggested they could try contacting engineering but weren’t sure if it was available. Something as basic as “how much electricity does your device use?” is not available online or upon request.

So yes, I’m 100% on board with this proposal. It’s insanity that it’s so difficult to find anything more than some silly marketing specs (3D, HD, WiFi, “Fast”). It should be listed on the product details page on any online store, or on the back of the physical packaging.

It’s easy to get all sorts of stats on components when purchased individually (RoHS, Lead free, 80+ certification, power consumption, thermal specs), but buy a device full of components and it’s a mystery in many cases regarding the real specs.

Considering how much we use our gadgets, knowing such information can mean big savings. Think about your home router and switches. Just a little power savings can add up over the 3-5 years you have them installed (and running 24×7). If you live in an area where power is expensive it may make sense to actually spend more for a higher efficiency device. 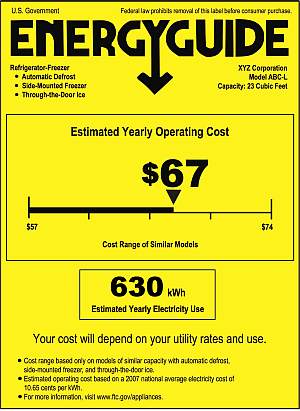