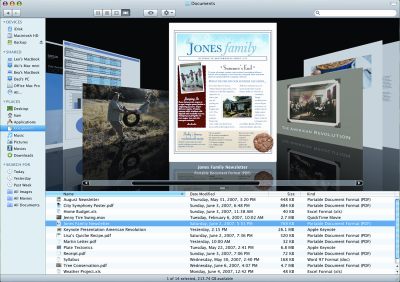 The Lenovo Blogs are just fantastic examples of corporate blogging. A great example is this rather candid post on Junk in Preloads. There isn’t much that’s really “new” in the post, but the amount of honesty in it is somewhat refreshing. My favorite quote is simply:

Now let’s be honest. We load up this software because we receive money from the vendors to do so. You as a consumer are much more likely to buy the full or upgraded version of a program if you already have it preinstalled. This is worth real money to PC vendors. On the other hand, it works both ways. It is this revenue from the software that helps fuel the PC price war. You all directly benefit from this practice. Without it, PC prices would be more than a few dollars higher.

How many would expect a PC vendor to say something like that in the past? They also seem to be using Flickr.

Dell is now getting in on the action as well with it’s own blog.

Still no true Apple blog. People have become desperate enough for a blogging presence that even Apple’s age-old Hot News has been referred to as a blog a few times. Most recently in regards to Steve Jobs Thoughts on Music. One day…

Walmart Video Downloads blocks all browsers but IE on Windows. I tried it from Safari on Mac OS X 10.4 and still wasn’t able to get in (they wanted me to still download IE 6). As noted by TechCrunch, initially it looked like someone didn’t include the stylesheet correctly. Now it’s blocked with a formal error page. Initially it worked with a reload, now not at all. Spoofing the UserAgent let me in, and revealed only a small CSS goof with the header. Didn’t try a purchase since there’s nothing there I would really want. I guess this could be considered a feature: My browser prevents me from downloading You, Me, and Dupree.

Apparently they use Windows Media Player for the DRM. I’d be surprised if it didn’t function properly in WMP when downloaded with Firefox. Thus far I haven’t seen any real difference between Windows Media Player 11 on IE and Firefox. It’s a great thing that Microsoft has drastically improved support.

There has been a fair amount of improvement in website compatibility with Firefox and Safari over the past 18 months. Unfortunately this isn’t an example of that.

My predictions, like many others were mostly off. So here’s my observations of todays festivities and announcements.

END_OF_DOCUMENT_TOKEN_TO_BE_REPLACED

Am I the only one who thinks Microsoft went a bit over the top with Windows Vista pricing? Looking at the pricing for Windows Vista I’m starting to wonder how “worth while” it really is. It seems when you look at it, you very quickly get pushed to Windows Vista Ultimate (which is super expensive). Wikipedia has a decent rundown on differences between editions and pricing

And of course, if you use a PC who ships the OS in an image format (like IBM/Lenovo among others), the “upgrade” editions only work if you install the previous OS first. Making the task of reinstalling on a system just that much more complicated. I had that drag when upgrading a system from Windows 98SE to Windows XP. That’s right, I had to install Windows 98 on a new drive, before I could install XP! What a mess.

Come on Microsoft… make the pricing more reasonable, or perhaps have some financing options on the site, so it’s more like buying a car.

I just can’t imagine the average end user spending that much cash to have the headache of installing a new OS. So I’d assume this is just an effort to get people to buy new PC’s, rather than upgrade their old ones. I just don’t see average Joe spending hundreds on the nightmare that is OS upgrades. I really don’t see it. From what I’ve seen, most people are fed up with paying for a nightmare experience like that.

It’s about time we see a fix (KB909095) to one of the most annoying issues I’ve encountered inWindows XP SP2. I first mentioned this bug back in November. They had one of those patches you could call up and request (because it wasn’t fully tested), but it didn’t work to well for me. I’m hoping this will serve me much better.

Foreword: This is somewhat of an informal rant, it’s pretty much my notes tinkering in Windows Vista.

Am I the only one who is not very impressed with Windows Vista? Several things so far have just shown to be a complete turnoff:

But is there anything cool besides the icons? Well I tried out the new Parental Controls on a profile, and to my surprise, they don’t just effect IE, but everything including Firefox (because it’s likely sniffing the TCP/IP stack like it should). Of course a very fitting screenshot:

And for those wondering, it does give what seem to be pretty nice HTTP Headers, so it would be possible to sniff and serve up our own pretty error pages to keep a consistent UI if desired. I can’t vouch for the effectiveness of the filter, since I haven’t tested it for what it filters, only how it interacts.

So will I upgrade? I’m really not sure to be honest. I see a few things that make me hesitant:

Perhaps I’m just fussy, or maybe I’m selfish for wanting an easy to use OS, that doesn’t have an abrasive security policy, is secure without locking me out of my own files or nagging me with warnings, and doesn’t cost me an arm and a leg to upgrade my somewhat new (less than a year old) hardware.

As far as next-generation OS’s go, my initial impression says Mac OS X, and Ubuntu still have a lead over Vista. If Apple can get Windows binaries running from within OS X (virtualized as rumored), that could be a crushing blow to Microsoft.

Hopefully someone at Microsoft is listening.

Installers suck for 1 key reason: you have no control. They put whatever they want on your computer. You may just want a driver, but your getting a whole package of garbage you don’t want. There is a workaround for this that works in most cases. It’s semi-technical.

You’ll need to install cygwin through the installer if you don’t already have it (yea installer, but it’s pretty handy stuff and a good installer since you select what you want)… In the “Archive” group select ‘cabextract’. I’d personally recommend you leave the rest alone, though you can slim stuff down if you want. Install.

Get The Installer you hate

In my case I’ll use the Logitech QuickCam driver.

In the cygwin command prompt, navigate to the file, and use:

Where installer.exe is, replace with your installer. In a few seconds you should see something like this:

Now navigate to the driver or file you want.

In my case I want a driver, so I can right click on the INF and “Install”.

Perfect. It now works, and I don’t have those “utilities”, “updaters”, or what ever garbage they think I actually would want.

All I can say about this is WOW. Kinda makes me want to add an Intel Mac to my collection (though I think I would really want a tower with dual processor or something really beefy, rather than current models).

What I really wonder now is, why they don’t make Boot Camp so that you can boot from an infinite amount of OS’s including Linux? Hopefully that’s under way.

Either way, really cool, and makes me love Apple hardware even more.