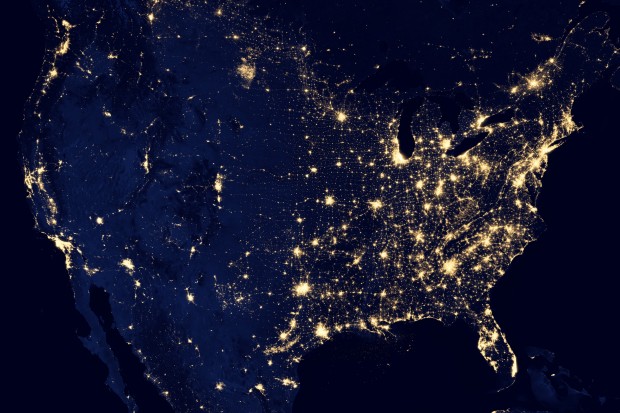 Awesome image released by NASA of the United States at night. There’s a set of images worth checking out including one of the northeast before and after Hurricane Sandy where you can see the impacts the power outages had from space.

Scientists at DARPA say there are some 1,300 satellites worth over $300B sitting out in Earth’s geostationary orbit (GEO) that could be retrofitted or harvested for new communications roles and it designed a program called Phoenix which it says would use a squadron “satlets” and a larger tender craft to grab out-of-commission satellites and retrofit or retrieve them for parts or reuse.

This is some serious Star Wars stuff here.

How old is the oldest working satellite? US’s Vanguard 1 is still in orbit 50+ years later, but it’s long since stopped working. Still pretty impressive considering most orbits decay over time and they meet a fiery death.

The most definitive list of old satellites I could find is this:

I was able to clean up this list a bit. My notes are in [brackets] to the right. For certain GOES 3 is still operational for communications purposes and is certainly one of the oldest if not the oldest working satellites in orbit.

It’s possible IMP 8 is still working as well, the most recent evidence I can find was from 2006 suggesting it was operational. FLTSATCOM 1 is likely decommissioned but I can’t find solid confirmation.

Several of the other ones are of a mystery. I suspect most of them had military elements to them and were quietly disposed of if they are no longer in use. If I had to bet, I’d say GOES 3 is most likely the oldest satellite in operation as of 2012.

GOES 3 is impressive. Who in 1978 would think it would be providing 1-megabit per second data transmission to the South Pole for communications purposes.

I have been a fan of Google Maps since day 1. It’s the best service out there so far. Now with Satellite mode it’s even better. But still, it doesn’t compare to the goodness that is Keyhole. I tried Keyhole a few months ago, and I didn’t go to sleep for the length of my 1 week trial. I was addicted. I saw the world. I’m still hoping Google will perhaps throw in some localized Adwords (shows relevant local ads based on where you are), and make a free version available. Keyhole’s animations and quality are amazing. Not to mention it does things other than North America.