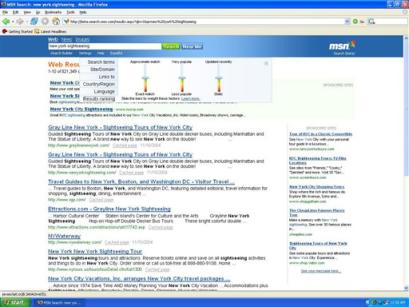 The Associated Press just plain rocks. The image from Yahoo (link will brake over time as usual) has this great text under it:

This photo provided by Microsoft shows Their search tool and the preference rankings that can be defined by the user. (AP Photo/HO/Microsoft)

Just wonderful to see that Firefox has spread as far as Microsoft. Even Microsoft uses Firefox a bit.

Mozilla has been getting a TON of press lately. From Slashdot, to CERT, eWeek, CNET you name it. Mozilla Firefox 0.9 has generated some serious buzz. The recent wave of IE flaws has also generated some buzz. CERT recommending alternative browsers has created some buzz. That’s great, but it’s not enough.

The following is just a list of the recent articles on Mozilla. Take a quick look at some of them, and who is writing them:

And some other news sources to cover Mozilla:

Source for the above is Google News, using the query “Mozilla”

Now, what did we see? My analysis is that the same target is being bombarded with Mozilla news. The tech crowd. The problem is this is a tiny percentage of the web community. And most of them are aware of Mozilla. Many have switched. Quite a few of these sites are big Linux news sites. They aren’t using IE to begin with!

The discussion right now, as Firefox 1.0 approaches is how to get that target audience. A few idea’s I’ve heard are:

So my question to the general community is how do we address this issue?

Update: We should also have a mailing list that can only be posted by a mozilla staffer. Used for releases to keep people informed. As soon as a new release comes out, an email is sent to those interested.