Bayesian Filtering is a great method for fighting spam. Unlike rule based filtering which spammers can easily adapt to with simple modifications, Bayesian adapts with the spammers changes, making it much more difficult for them to defeat the filtering. As a result it’s used in server side mail filtering as well as client side filtering in various products including Mozilla Thunderbird, SpamAssassin, and SpamBayes. Despite this level of “intelligence” it’s not foolproof. Like anything that analyzes unsanitized input, its vulnerable to poisoning. To be fair, there is a debate on if it exists or not. I personally believe it does exist.

END_OF_DOCUMENT_TOKEN_TO_BE_REPLACED

Remember when Sony was the gold standard of electronics? Well, those days are obviously gone. Earnings are down 94%. Wow. Part of that stems from the laptop battery problems, but an under-rated portion of that is the lack of clear innovation at Sony for the past several years. Sony still doesn’t seem to think the Walkman is threatened by the iPod.

When will Sony learn to innovate and return to the days of old? Hopefully soon. 94% drop in earnings can’t go on forever, so something must happen.

Wired’s blog Monkey Bites has a small mention on reporter in response to a comment I left the other day. Very cool to get a little publicity for the tool. Those reports really do make a difference. The more reports in the database, the more we know about problems facing users on that wild wild web.

BusinessWeek has a short post on Firefox, a good (but short) read, my favorite is:

…Firefox has anywhere from a 10% to 18% worldwide market share among browser users, depending who is counting, and almost every Web site that matters makes it possible for Firefox users to fully access their pages. The turning point came earlier this year when banks and financial services outfits including American Express and Fidelity switched over…

I don’t really like the title “Firefox: Mission Accomplished”, as foolish gloating has a history of coming back to haunt you. Thankfully that appears to be BW’s choice of words. Firefox is far from done. More can be done to improve the users web experience, more site compatibility needs to be fixed, and more people need to be invited to take back the web.

With the pending release of Firefox 1.5 said to be really soon , I’m getting ready to see what the press has to say, and ultimately the users.

So if you notice any news articles, feel free to leave a comment, or send me an email. I’m especially interested in anything that references the new reporter tool (aka “that broken website thing”). So if you find any of those, be sure to leave a comment or email me.

This really is the fun part of the release cycle. I’ll leave this post with a great quote from this Browser Face-Off Article:

Regardless, just having a choice is a great thing for consumers. Vive la différence.

The individual who wrote the capture for the now infamous “finding” picture broke his silence today.

The people were swimming in chest deep water, and there were other people in the water, both white and black. I looked for the best picture. there were a million items floating in the water – we were right near a grocery store that had 5+ feet of water in it. it had no doors. the water was moving, and the stuff was floating away. These people were not ducking into a store and busting down windows to get electronics. They picked up bread and cokes that were floating in the water. They would have floated away anyhow.

looting, as defined by the dictionary is:

finding on the other hand, is defined in a way that makes it sound much more law abiding:

1. To come upon, often by accident; meet with.
2. To come upon or discover by searching or making an effort: found the leak in the pipe.

Taking property that isn’t yours without express consent, especially if it’s only feet away from a grocery store (which makes it obvious who the owner of the goods are) is still looting. Both definition 1 and 2 for looting 100% describe *both* pictures. The definition of “finding” doesn’t apply to either in the context of the caption. This is just like you can still be charged with armed robbery even if you don’t fire your weapon. Looting is looting. It doesn’t matter the color of your skin or what type protection the property owner had in place to protect their goods. You steal them in a circumstance like this (this really falls under time of war like anarchy)… it’s looting.

Yahoo published the following in regard to this topic aknowledging it and explaining (although they didn’t write the captions, they just syndicate it):

News photos are an especially popular section of Yahoo! News. In part, this is because we present thousands of news photos from some of the leading news services, including The Associated Press, Reuters, and Agence France Press. To make this volume of photos available in a timely manner, we present the photos and their captions as written, edited and distributed by the news services with no additional editing at Yahoo! News.

In recent days, a number of readers of Yahoo! News have commented on differences in the language in two Hurricane Katrina-related photo captions (from two news services). Since the controversy began, the supplier of one of the photos – AFP – has asked all its clients to remove the photo from their databases. Yahoo! News has complied with the AFP request.

Here are a few of the postings that have commented on the photo caption language:

You can comment on the issue on this message board.

Yahoo! News regrets that these photos and captions, viewed together, may have suggested a racial bias on our part. We remain committed to bringing our readers the full collection of photos as transmitted by our wire service partners.

Back from a week away in sunny Aruba [CIA Factbook | Wikipedia]. Beautiful sunny weather, resort, beaches, food. Saw Geraldo Revera [perhaps better link], (apparently staying in the same hotel on our floor, or the one above) and Greta Van Susteren (not sure if she was staying there or another hotel in the area). ABCNews also appeared to have some people there. Obviously in regard to the Natalee Holloway situation.

In other news the hard drive in my laptop is failing, and CDW failed to ship the new drive I attempted to purchase. Tomorrow is the 4th of July, so likely won’t get to call them and speak to a human being until Tuesday, and I’m sure it will take a few days to arrive (sigh). So I’m down to 1.25 computers (my laptop is at about 25%, and my Mac is at 100%).

I’ve got quite a bit of catching up to do as well, reading, bugmail, etc. etc. I’ll be taking care of all that relatively soon.

So that’s why things have been quiet, and will continue to be somewhat erratic (until I get my new Hard Drive, since my email mainly resides on my laptop for mobility reasons).

Just coming down the wire. I’ll update this post as information becomes available.

MSNBC was first, followed by FoxNews

According to CNN (no article, just breaking news blurb):

U.S. agency urges evacuations along coasts of countries on Indian Ocean due to tsunami fears after 8.2 earthquake. Details soon.

Just saw this via Asa. Amazing. Congrats to Blake!.

This is a giant accomplishment. Wired is not just a geek magazine, but has lots of mainstream readers who read it just because they enjoy technology. Wired’s got a great audience. So this means a lot in terms of promotion. 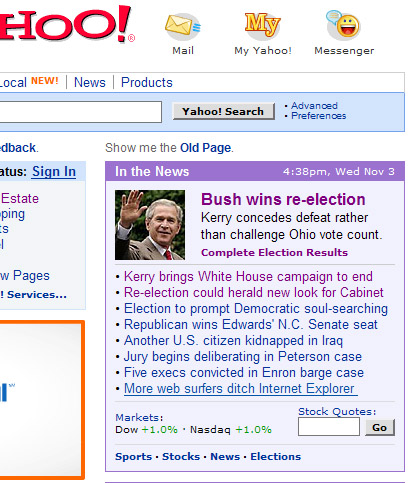 Well, if this doesn’t show the power of Firefox, nothing ever will. That’s right. Hours after the president announces he won the election, a nice “switch” style article right on the Yahoo homepage. It links to the syndicated feed of this PC World Article (link to PC World Article, because Yahoo links tend to break).

The article spends a bit of time on Firefox, which is great. What’s really great is this positioning. A day of elevated news coverage, and a browser article made the elite Yahoo Homepage News feed. That’s a big gain for Firefox.

On an odd note, the only direct link to something mentioned in the article is a link to IE Developers blog. Not a link to Mozilla.org or spreadfirefox.com, or getfirefox.com.

So the good press is coming along!

IMHO this is the biggest press event so far. It’s really the biggest article oriented at mainstream internet users. It’s not on Wired, Slashdot, CNet. It’s right on the Yahoo home page. So non-geeks can read.

This is big… and it’s only getting bigger.