A little behind getting this week up…

I’ve finally got just about all the network graphs I maintain using RRDtool rather than MRTG. I started doing this since MRTG isn’t good for graphing things with more than 2 sets of numbers. I started doing this because I wanted to track cable modem data. I figured while I’m at it, I should move other stuff too.

So much easier to read, and so much faster since your not spitting out graphics files every time the system polls. Not to mention the quality of the graphing image is much nicer. These are shrunk a little and they still look great. 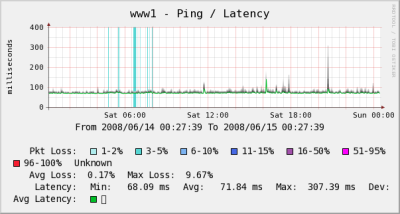 MRTG is still running, but I think I’ll shut it down as soon as I can verify things are working the way I want.

Drobo initially didn’t impress me to much, but after watching a demo I’m somewhat impressed. The positives:

There are some downsides:

Of course for true backup you need to offsite your data, but you can do that through standard means, and using Amazon’s S3. So your covered there.

The downfall of this product is the lack of a 10/100 Ethernet port. It would likely have been pretty cheap (lets face it network devices are pretty cheap these days) and would have removed the need for a PC. You could of course hook it up to a Access Point such as the Airport Extreme… but you don’t get the greatest level of control with these.

Ideally a real cheapo Linux machine (Intel Celeron, 1GB RAM, 80GB HD) with a Drobo would be an awesome backup solution. You could then use MRTG to graph network/data storage usage, manage usage, quota’s or whatever else you wanted to do. Even a media server. Backup some data with S3? No problem. Could even setup something like BackupPC to backup entire PC’s.