First release will likely be Windows only, but Mac support is easy once I get things stable. I just don’t feel like debugging on two platforms at once (reformat iPod each time).

I’ve now had about about 48hrs with the new laptop. Just a few thoughts (in no paticular order):

On the plus side

On the questionable (not really much here)

So there’s really not much to improve on. The biggest would be the fan noise, and getting backups to be quick and smooth. Both aren’t that big of a deal. Fan noise I can deal with (my old laptop I think was louder), and the backups will be done with other software.

I’ve also decided to abandon Sygate as my software firewall, and move to Kerio (which is going to be unsupported soon). I really run these only because it’s a laptop, and not always on my clean firewalled network. Anyone have a recommendation for a good (free) firewall on Windows that doesn’t suck (read: no zonealarm). How could it have gone this long without an open source contender? Kerio doesn’t seem to bad, but I don’t like that it’s approaching End of Life.

Oh yea, Opera fans [read: anyone who doesn’t like IE, including Firefox fans] will be interested in this (if they haven’t found this yet). If you boot this system, and press Access IBM you go into an emergency partition on your hard drive (apparantly powered by a scaled down Windows NT or 2000 with a bunch of utilities. One option is to browse the web. On closer examination, they use Opera, not IE (info on the feature found here search for “Get help, by being connected”).

The laptop story is finally over.

Yesterday, a shiny new Thinkpad T43 arrived. I gave it a few hours yesterday and it performed well, no signs of any problems. I’ve got some extra RAM on order to help things out even further.

Executive Relations did come through, despite some supply issues limiting their abilities. They actually sent two (2) laptops in an attempt to get this resolved by today (Friday 10/21/05). One coming from Lenovo/IBM itself, one coming from a business parter. One arrived yesterday, and one arrived ahead of schedule (today) rather than next week sometime, and will now be mailed back.

Thanks to anyone over at Lenovo/IBM who slaved over my old A31 in attempts to resurrect it, or battled supply issues to get me a new T43 replacement.

And a reminder to everyone with a laptop: keep that warranty going for as long as you value your computer. It’s very good to have.

For anyone wondering, the fingerprint scanner, is somewhat of a toy (it’s not really any more secure than a good password, because it apparently on matches parts of your fingerprint, not the entire fingerprint, for speed purposes)… but makes logging in much less obtrusive. Kinda feels like 007.

And yes, I’ll be back working on the reporter tool a bit during the week now, not to mention mozPod, which I’ve neglected for months.

I’ve gotten several emails about this now, so it’s time for an update. I’ve been busy with many other projects, and have been slow on this for a little while. It’s almost at 0.1 (our first release). Asa’s working on some icon love, and I’ve been testing a few things. I’m hoping to have a release out soon (few more weeks). Some general notes in no particular order or relevance (make what you will of it):

Summary
0.1 will be a rather rough release, just to get an idea of what we can do, and how it can be done. It’s far from a release quality product, and only recommended for those willing to give detailed feedback for fixing bugs.

I’ve got a bunch of things in the works:

So things may be a little quiet as I wrap some stuff up, and keep up with school work. All are looking pretty good at this point. So I’m rather excited. So much work being done, and so little to actually show right now. But hopefully at some point in the future things will start seeing the light of day.

So keep your eyes on this general space for a new amazing design, big announcements (some bigger than others), and a secret something to be unveiled (the secret may be under wraps for quite some time) to be unveiled on a day of the week that ends in ‘y’. And yes, that’s the only hint I’m giving.

I’ve promised mozPod for some time, well it’s getting close to a 0.1 release, just a few more things I want to do. Some cool things in the past few days:

It’s not done yet, but were starting to look usable, and that’s a good thing 😀

I mentioned a little while ago that I was working on mozPod, to bring iPod sync to Mozilla products. I stopped for a while because I don’t have USB 2 on my laptop, and that makes hooking an iPod up really really bad. In fact, it’s pretty much been sitting in a box since November (yea, that’s bad). Well I ordered a USB 2 Card for my laptop the other day. It shipped, so I should get it in a few days. But it will be another few days until I get a protective case for my iPod, so I won’t be taking it with me, so I’ll only be doing a tiny bit of hacking.

Oh yea, the reporter tool has been consuming a ton of the time I devote to open source work. So as that starts to slow down a bit, mozPod gets a little more time.

Now if anyone wants to write some synchronization code, feel free to do so. 😉 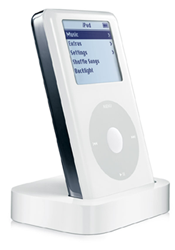 Ability to sync your Thunderbird Address Book to your iPod.

Q. Why not yet

A. Still working on it

Q. Why is this Q&A so short

A. Because I’m tired.

Q. When will it be released?

A. Most likely I’ll have something for you all to play with in the very near future.