It’s a pretty interesting video. I should note it’s 80’s in every way, shape and form. This almost feels like a tour given to Mister Rogers via “Picture Picture“.

I acknowledge this blog post has way too many childish elements. 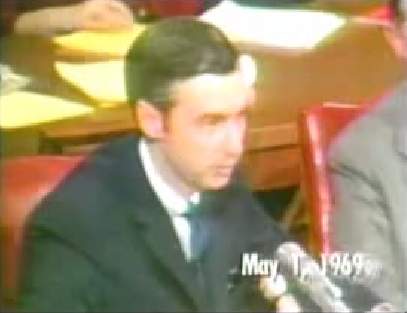 Here’s a great video clip of Fred Rogers aka Mister Rogers testifying before the United States Senate Subcommittee on Communications on May 1, 1969. President Nixon wanted to cut the funding for the new Corporation for Public Broadcasting in half to allocate more money for the Vietnam War. Fred Rogers went to Washington to change that. The senator seen throughout is Senator John O. Pastore. The end is really quite great, but don’t just skip through it, watch it.

This series of video’s on him seem to also be really good. I’ve only watched parts, and intend to see them all at some point. One thing I noticed is that his puppet voices were really somewhat pathetic they really don’t sound to different from his own voice, especially that of King Friday XIII, yet somehow they still rival Jim Henson. Some interesting little details in there too.

He’s also the latest inductee in my quotes database (off to the right hand side of this blogs homepage).