I’ll admit I didn’t follow the RHEL/CentOS 6.0 release cycle as closely as I should have. I’m just now jumping into it. Today I learned yum-updatesd was dropped upstream. YUM isn’t perfect, but I did appreciate yum-updatesd. I liked the email notification feature. It doesn’t seem like there’s any alternative that easily gives me that back.

Wired has a great piece on Linus Torvalds. Linus is one of the most under appreciated people in the world. We all interact with his work daily, yet very few even know what his work is, much less him. Even Steve Jobs apparently realized that:

Torvalds has never met Bill Gates, but around 2000, when he was still working at Transmeta, he met Steve Jobs. Jobs invited him to Apple’s Cupertino campus and tried to hire him. “Unix for the biggest user base: that was the pitch,” says Torvalds. The condition: He’d have to drop Linux development. “He wanted me to work at Apple doing non-Linux things,” he said. That was a non-starter for Torvalds. Besides, he hated Mac OS’s Mach kernel.

“I said no,” Torvalds remembers.

Had he said “yes”, the world could be a very different place. Mac OS X surely would be different, same for iOS. Linux would also be different as the kernel would have likely lost some steam as different folks forked and went their separate ways. Linus is a driving force and a constant in the Linux world. Linux runs many of the most popular services in the world from Google to Facebook to the Android OS among others. It’s being free, open and a rock solid OS is part of what helped these companies grow.

It’s amazing to think how far that chain reaction would go.

A few days ago I did a kernel upgrade from 2.6.24 to 2.6.32.1. Surprisingly the load on the server has dropped slightly. The server is generally under minimal load, just the way I like it so a drop is particularly surprising. It was restarted just a few weeks prior, so I don’t think the restart had an impact on load. Unscientifically it appears the box is under the same level of usage as prior to the upgrade. The two spikes that delimit the restart are due to some log processing. 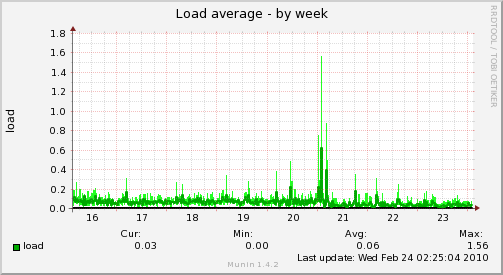 One of the coolest things I’ve seen announced this year so far is the Marvell SheevaPlug.

There are so many things about it that are impressive. It’s size, it’s 1.2 GHz processor, only drawing 5 watts, it’s open design, it’s low cost. At $99 for the development kit, that’s a pretty cool device. I suspect we’ll see a lot of interesting hacks take advantage of the low cost hardware. Oh and it not only supports Linux, it’s trying to improve Linux support.

This little gadget is so tempting. I can see this being a hobbyist’s best friend.

TechCrunch popped the idea of creating a Web tablet based on Linux and Firefox. The idea is interesting and something I wanted to pick apart (and reassemble) a bit. It’s a novel idea and I’m very interested in watching it. Success or failure, I think important things will be learned in the industry of open source hardware. Here’s how it’s described:

The machine is as thin as possible, runs low end hardware and has a single button for powering it on and off, headphone jacks, a built in camera for video, low end speakers, and a microphone. It will have Wifi, maybe one USB port, a built in battery, half a Gigabyte of RAM, a 4-Gigabyte solid state hard drive. Data input is primarily through an iPhone-like touch screen keyboard. It runs on linux and Firefox. It would be great to have it be built entirely on open source hardware, but including Skype for VOIP and video calls may be a nice touch, too.

Overall it’s pretty sound though a few things jump out at me.

The ability to adopt some or all of these ideas needs to take into account price. But these are what I think will likely gauge it’s success or failure, assuming it reaches the market. The benchmark is the iPhone, love it or hate it. Being as user friendly, flexible, and durable is important. Taking advantage of the form factor, and a reasonable price is what will set it apart.

What will we call it? The best name I can think of is the Firefox Tablet, but that will take a round of discussions with Mozilla.

With the modifications to Firefox, that’s not likely. Get ready for IceWeasel Tablet.

Business Week has a great write up on Macs in the office. Apparently more and more companies are becoming receptive of a dual platform environment, and more and more employees are requesting better computers (yea, I said “better”).

I’ve found consistently over the years that they are just more reliable requiring much less effort to keep running smoothly for years on end. I can’t recall a similar experience even with Windows XP, which is clearly the winner of the Windows family. Less time fighting the OS is more time being productive. Not to mention the improved usability just allows for more efficiency (Exposé is still amazing).

I don’t think the reason for the rise in corporate popularity is so much about the usage of an Intel processor, but because of OS X. Most companies I’d venture won’t want to pay for dual OS (and emulation) since that bloats the cost of the workstation. Some obviously will, but not too many. The rise I’d say is mainly attributed to applications becoming more web based, meaning less proprietary software installs. All you need these days is an office suite (Office X, Google Docs) web browser (Safari or Firefox) and email (Entourage, Thunderbird, Apple Mail). Apple’s also made giant leaps in ensuring compatibility with other platforms such as NFS, SMB even Active Directory.

Linux is totally usable in the workplace, but lacks the usability and the sparkle to compete with Apple in this new open market thus far. Ubuntu’s made great strides, but it still doesn’t hold a candle to Leopard’s polish.

Apple does however sorely need a mid-range line to compete further, and to enhance it’s business and consumer sales. Essentially an iMac but trading the built-in display for some expansion at the same cost as the iMac line. The result would be a pretty impressive line up. It likely wouldn’t kill Mac Pro sales since anyone currently spending $2,500+ is likely still going to be willing to drop that cash for the top models. It would likely impact Mac mini and iMac sales slightly, though it’s a reasonable trade-off. Apple would still have a hard time pushing it’s display’s to accompany those computers, due to Apple’s rather high price as opposed to a more generic Samsung or Dell, but they could easily introduce a lower end for general office use, and make the current models a higher class.

It will be interesting to see how Apple decides to go after this market share.

Mark Pilgrim has a great picture of the top laptops on Amazon.com right now. What I found interesting is that the first Windows laptop is #6 (and no it’s not running an Intel), The #1 and #2 goes to Mac OS X and Linux.

Taking a look at the competition it’s pretty clear why. The Times They Are A-Changin’.

That new 9″ Asus Eee looks pretty nice. What would be ideal is if they made the 7″ with a higher resolution and kept the price the same. 9″ is a little large for this class of mobile computing.

According to Mitch Meyran at Free Software Magazine Hotmail is crippled in Firefox 2.0 for Linux. The fix? Spoof the user agent to be Firefox 2.0 for Windows. Another fix is to use Gmail or Yahoo Mail. Anyone else experience this problem? There does seem to be a few reports of this.

Paul Stamatiou has a great blog post on the DIY $200 PC. Premise is that for $200 (or possibly less depend on your requirements) you could put together a little PC for some purpose. The core of this being affordable is the new-ish Intel D201GLY2 Motherboard/Processor combo.

The only problem I see with it is the board surprisingly uses an SiS964 Southbridge, which for the moment doesn’t seem to be well supported under Linux from what I can tell. That could make use a little more complicated, though I can see that changing relatively quick. I wouldn’t run a modern version of Windows on something like that, not to mention Windows would cost about as much as the hardware. It is a Celeron, but it’s 64bit.

This means for approximately $200 you can put together a very low power, quiet (could even be fanless) computer/device/server/appliance for whatever purpose you wish. A little work and it would make a great file server. Add a better NIC and you’d have a great firewall. Hook it up with some WiFi and it can easily get on a network from anywhere. There’s a ton of possibilities here. It could be a lot of fun to build something out of it. I’m not sure using something like MythTV will work to well, at least now.

Very cool stuff. I’m interested what people will do with it.