Building a PC headset adapter for a Nortel 1120E actually turned out to be dead simple. The headset port is actually a pretty standard 4P4C port (also known as RJ9 or RJ10 apparently). For about $5 I was able to put together a fully working adapter to use any standard PC headset.

I suspect this will work just fine with most phones even non-IP phones however your mileage may vary. Obviously this is at your own risk.

If you have an cable from a phone receiver you could easily reuse that, just cut one end. Those are just 4P4C cables.

The stereo connection jacks are rated 5,000 cycles, though they feel a little flimsy to me. For the price however they or not bad, just proceed with caution. If you build this and intend to plug/unplug often you may want to consider another one. For me, if they break I’ll swap them out.

I was originally going to solder and tape it up to save space rather than use a board. The board was for prototyping and I’d just reuse it for something else later. At least for now however I’ll just leave it all taped to the board, it seems pretty stable if you leave the headset plugged in. I just taped it to the base of my monitor. I really wanted a breadboard, but there were surprisingly none in stock at RadioShack. No breadboards at RadioShack is like a McDonald’s without burgers. The PC board however worked for the task.

To summarize how it’s connected, a 4P4C cable has two conductors for speaker and two for microphone. It’s simply a matter of connecting them to the correlating jack with the correct polarity and you’re done. The following diagram (from Wikipedia) illustrates the pinning:

On the SJ1-3523NG jacks, this corresponds as follows:

A little testing showed that the presence of a microphone is how the Nortel 1120E can tell if the port is connected or not. That means you can’t just use the headphone for example to listen in on a call. A microphone must be connected (muting works fine however).

I grabbed a Logitech ClearChat Style Headset which retails for under $20. Works perfect for the task and has inline controls for easy mute/volume control.

As a result I put this together using only a few dollars of parts and using only tools found in my cube (wire strippers, wire cutters, scissors).

There you have it. It only costs a few dollars and is dead simple to wire. Now I can code while on calls without having to decide between speakerphone, which echos when several of us are on the same call or risk neck pain trying to balance a phone receiver. 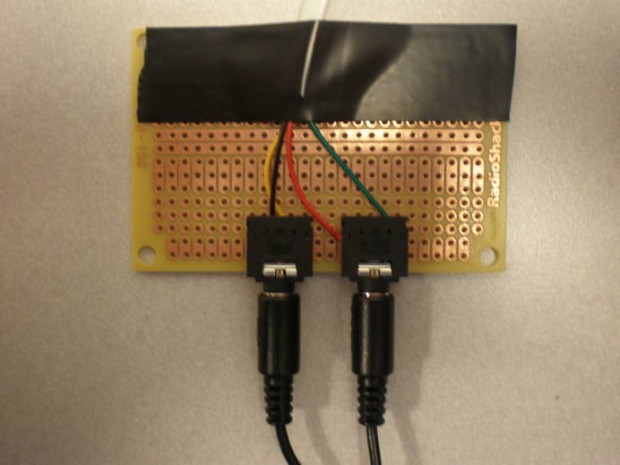 In practice, I have tape holding the jacks to the board. I removed it for the photo shoot to better show how the wiring is done.