I’ve been looking for a 4 conductor male TRS connector (Apple iPhone headset jack) for a small project. Simple enough. I found a cheap extension on Amazon a week ago that seemed to fit the bill. For posterity here’s what the description says: 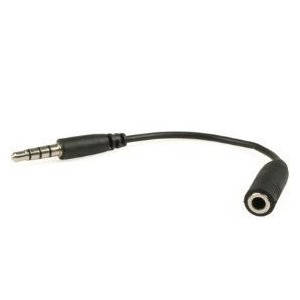 It arrived in an envelope containing a tiny ziplock back with no labeling (it’s barebones). When I hooked it up it seemed that audio quality wasn’t very good. I never bothered to check out the microphone. At that price it obviously didn’t make fiscal sense to return it as the postage costs about as much as it’s worth. So I decided to finish dissecting it.

From what I can tell it’s actually 3 wires. Each is a different color (red, copper, green) with some white strands in the core. The female jack has two prongs with one wire attached to each and the enclosure itself which seems like it’s the ground. My suspicion is that the audio is either combined or only one channel is used making it actually mono. The jacket I dissected was molded on so it was virtually impossible to remove the plastic without severing the thin wires in the process.

Here’s what the wire and the female jack (sideways on the bottom) look like:

Here’s the jack from the back side. I suck at photography and only have a P&S camera, so it’s a bit blurry: 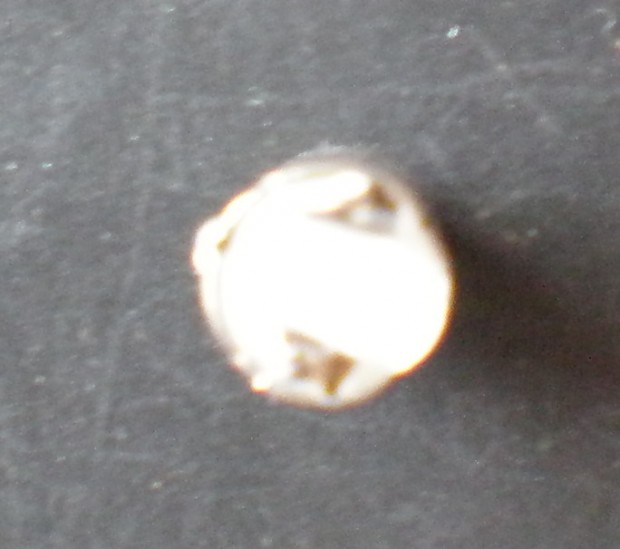 My original plan was to find a new 4 conductor TRS male plug, but that proved impossible via the usual sources. 3 conductor is easy.

If anyone has suggestions feel free to reach out.

Today it happened. FedEx dropped off my free iPod. It’s a 20GB 4th Generation Apple iPod. I was just about to leave, so I took a few pics with my Camera Phone and left. I’m to busy to open and play for at least a few days. I’m pretty sure it’s not an empty box (because I know someone will suggest that), since it came directly from Apple’s Shanghai manufacturing contractor/facility.

Of course I posted those pictures for you to see. Go ahead, look, enjoy. They are low quality, from a camera phone, but they should be compatible with most human eyes version 1.0+.

Bottom Line
Freeipods.com/Gratis Internet at least appears legitimate. I did get my offer. They “sent to vendor” 9/15, and I got it today, 10/25. Reportedly shipping has picked up to being about a week or two. Though some Sept people are still waiting for their iPods. I got my iPod for trying a silly offer, and getting a few others to do so. Some sound like good offers, so you may want to seriously consider it. Others are just downright rediculus (like these magic pills). So pick with caution, and read the offer. Some are only free if you cancel within the trial period. Some never bill unless you use the service. Some like eBay don’t require billing.

Spam Report
I am still getting about 3 spam emails a day that originate through this offer (I used a unique address, so only Gratis has used it. This is despite unsubscribing from all mailing through their website 2 weeks ago.

So is it a scam/multi-level-marketing/pyramid scheme
That’s hard to say. If you say it is, then technically any health club providing free membership to those who recommend friends would be too. There was no signup fee, I didn’t pay Gratis a penny. So it’s not really a Pyramid scheme (since those you normally pay to join, then get others to pay you). I’d really consider it to be on the level of how banks used to give out things like Clock Radio’s when you opened an account with them. Or a used car dealer throws in a toaster if you buy a car. With Gratis the condition is you have to refer a friend prior.

Should you do it
If you have time, patience, and think you can find a few friends to help you out… go for it. Otherwise, don’t even bother wasting your time.

Lesson Learned
Don’t fall for anything until you see some evidence. In my case, Wired.com provided that, as well as an interview on TechTV. There are some hoax impostor sites trying to cash in on Gratis’s reputation. Be very careful.

Will I try another
I do have a freeflatscreens.com account. Feel free to signup and help me. We’ll see if Gratis strikes twice with a shipment.

This is part of a multi-part story: First Post

I confirmed with FedEx that a package from Apple Computer Inc. to Robert Accettura has shipped. Unless Steve Jobs decided to send me a dog turd via FedEx, that might be an iPod. Also in the news, it appears the iPods are no longer graffiti covered with freeipod.com on the back. The part number for the iPod shipping is for an unengraved iPod.

I’ll keep everyone posted as news happens. This is breaking news (just hung up the phone 2 minutes ago).

The latest news is Freeipods.com is now using the Apple Store as another/replacement provider of iPods. But there’s a change. It appears now all iPods are inscribed “Freeipods.com”, you can see pictures someone posted here.

While it may sound trivial, it does make it harder to get repairs (always seems to take longer on personalized iPods), not to mention people who wanted to exchange for upgrades to the 40GB can’t do so.

Well, I decided to do some freeipods research:

eCost has been a known supplier for freeipods.com. PCMall has been said to be a new supplier. Though no confirmation on that.

The company apparantly has more than a week of shipments. Nobody sounded like there was any sort of problem shipping ipods out the door. No limits seem to be in place. In fact, the PCMall rep even joked with me “buy them all, and we’ll make you a deal”.

The folks at both companies are as always rather helpful. I’ve had a good experience with MacMall in the past. Though this makes me wonder why Gratis is lagging.

I’ve reported before that you will receive spam if you signup for freeipods (so use a free email account your willing to get spammed). I also reported Gratis is working to stop it (or so they claim). Well, it appears they are making some effort:

Enter your email address there, and apparently in 10 days time, you will not receive any more spam. I’ve tried it and will report how it goes. I currently get 2 a day from them. Lets see if it goes to 0. It appears the address hasn’t been shared with more than 1 or 2 parties. So lets see if it goes away. There seems to actually be a fair chance.

See folks, I do keep everyone updated on this.

In continuing with yesterday: Wired News has an additional story. Interestingly:

“We are suspending all marketing via email to our customers, and wanted to make sure you knew this was an important and sensitive issue for us,” Martin wrote in an e-mail. “Sending promotions to users is a fairly standard practice for many industries, as an additional source of revenue, but we definitely want to continue to spread a positive and trustworthy image of our company down the road.”

I got 2 more today since I posted last night from this source. Lets see what happens? Will more spammers gain access to the address? Will it go away? Or just maintain it’s current flow rate?

I can also confirm the following:

Earlier this month, Jim Youll, a 39-year-old CTO from Cambridge, Massachusetts, signed up with a virgin e-mail address and within hours started receiving spam.

“This is not an encouraging trend,” he said, “and these are not targeted ads. They are garden-variety junk spams.”

I’ve had the same experience as I mentioned yesterday. It’s random spam.

I’ve got to admit, investigative journalism is addictive 😀 .

Found this article today about freeipods.com. A few things to note:

“The wait is 100 percent due to Apple’s manufacturing,” said Gratis co-founder Peter Martin. “Apple is on back order. The delay is three weeks plus. They sit in the queue and when it gets to the vendor, it goes out the door.”

…As a result, Gratis is fast becoming the complaint of choice. Wired News reported complaints against Gratis are piling up at the Washington, DC branch of the Better Business Bureau…

[Source: The Mac Observer | Link added by me]
I checked out what the BBB says about them so far, and it says:

BBB Customer Experience Record
The company has resolved any customer complaints presented to it by the Bureau. The company responded to complaints with an explanation of its advertising and reference to its terms of service, conditions affecting fulfillment of orders and rewards, and other information available on its web site.

Well, I emailed Gratis the other day via their support option on the freeipods site, and here’s what I found out:

When asked if the iPods really are on months backorder, as rumored around the net, I was told:

Yes, the mini’s are backordered (not necessarily for months). The HP’s are shipping out the fastest.

[Source: correspondence with Gratis Internet]
When I asked specifically about the 20 GB Apple iPod, I was told:

The HP’s are not on backorder. The apple’s are in high demand. I can not give you an estimate arrival time for them. Sorry

Which is interesting because while some people report receiving hp iPods (hPods) rather quick, others still are waiting for them. A popular place for people venting has been freeipodguide.com forum.

Another interesting note is that their supplier is eCost, which has been rather consistent, besides a small period the other day, with keeping the Apple iPod in stock. It appears the same as the hp iPod.

Customers have also reported an increased amount of Spam e-mail since giving their e-mail address to Gratis Internet. Mr. Martin and his partner Rob Jewell denied giving customer e-mail information to third-party companies, but admitted customers do receive a small number of messages from select parties.

I’ve been keeping a close eye on this one: I’ve had 11 spams from them from 9/20 – today. I know they are from freeipods origin, since it’s an email alias I created on my mail system for the purpose. At least 3 were sent via a DNSBL (DNS blacklisted) mail server: a known source of spam. Most of a suspicious nature (start regrowing hair, “make today payday”, “become 25,000 richer”). Though they are right. It’s a ‘small number’. Most originate from the same sender. And it did say in the Terms Of Service they could do so. So they didn’t deceive.

So now the question is when will Gratis start shipping. Will they select a new vendor? CDW? Apple Store?

Any event, we will see.

As always, I will keep everyone posted with progress as I check this out. As you can see, I’m very willing to give all the info I can. I’ll be posting more information as soon as it becomes available. Keep an eye out.

Oh yea, if you want to try for a freeFLATSCREEN, I’m looking into that as well.

This has been another report from the news network you trust: Me.

So that’s where we are. More updates as they come on the news network you [really, somewhat] trust.