As a frontend developer I’ve long argued the magic formula for a good website is:

An interesting quote from CNet:

The same effect happened with Google Maps. When the company trimmed the 120KB page size down by about 30 percent, the company started getting about 30 percent more map requests. “It was almost proportional. If you make a product faster, you get that back in terms of increased usage,” she said.

Just goes to show that faster things become more than useful to users. They become a convenience. Users don’t really care how it looks or they would have switched from boring Google a long time ago. They just find it so convenient and quick they can’t stop using it.

I suspect this is why digital clocks are so popular. 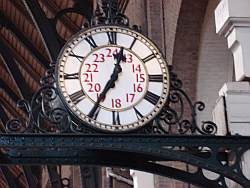 Most people find an analog clock to be “classy”, in particular when there are roman numerals. But when you come down to being practical, they aren’t as quick to read for most people since we rarely deal with roman numerals. The solution used to be using Arabic numbers to increase usability and speed: 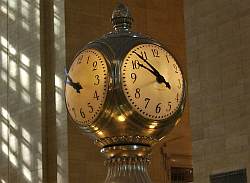 This is better, but not perfect. Still slow to read, and your estimating the minutes. These days, we have the technology to produce low cost digital time readouts with Arabic numbers. These are more accurate since they show the minutes, and maybe even seconds, and can be read at a glance with almost no effort.

Despite hardly looking fancy, this is what you see in most train stations, airports, etc. The older clocks are still around, but mostly for aesthetic purposes. People are willing to sacrifice looks for convenience. That’s why they walk around with digital watches rather than the more classy ones. Both can be found for cheap, but one can easily be read (even with poor vision, and in the dark).

Simplicity always rules. Unless your a nerd with a binary clock (which is cool).

I suspect this rule also holds true for software. If it’s faster, people are more inclined to use it. People moved from IE 6 to Firefox because it’s faster. Given that Firefox 3 is even faster… I’m hoping this trend will be proven yet again with an improved adoption rate.

Another upcoming test of this principle will be the Apple’s 3G iPhone. Will the average number of minutes browsing the web increase with the additional speed of a 3G network? Will faster performance make people use the device more? I suspect so. I also think it will increase adoption as many people were turned off on the idea of spending that much for EDGE. For 3G, that’s a different story.

It’s really pretty interesting stuff. People often associate usability with user interface design, and never performance. But that data really does seem to point to performance being one of the easiest ways to make a product more usable.