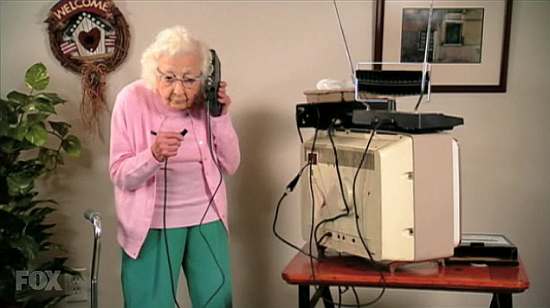 February 17, 2009 (125 days from this post) full-power analog TV will be no more. If your still enjoying OTA analog signals, see the above video for how to get a digital TV converter. I found the video pretty amusing.

For most people who use cable or satellite nothing is involved. For those who still use OTA TV, they may need a converter if their TV can’t handle it. For broadcasters it does however have some complexities.

Arbor Networks found that almost nobody is using IPv6 (a peak of 0.012% to be exact). Not exactly shocking.

This is due to a chicken or the egg problem:

There are however a few ISP’s that have experimented with IPv6.

Of course another issue is that most websites don’t use IPv6, but I think that’s the easiest to fix. Since most servers are hosted in data centers with expensive routers that could be upgraded. Nobody bothers because it’s not much more than a novelty. Servers themselves use modern operating systems that can easily support IPv6.

So what will change this? A massive government push. Something along the lines of Digital TV transition. It would need to do the following:

Unlike the Digital TV transition, there’s no real push to kill IPv4, so it wouldn’t be so bad if it died a natural death like Gopher and just became antiquated and disappeared. DTV is different since the space freed up can be auctioned for large sums of money, which is the real incentive for the switch anyway.

Will it happen? I doubt it.

The Olympics is available via IPv6 (more info here). China has a better IPv6 plan since their growing population means they see the need for more IP space. Not to mention the US has a much higher allocation than China.

The DoD as well as the US Government in general has been moving to IPv6, but they have yet to make any real push for the private sector.

Until the US Government realizes a push is necessary it’s not going to happen. To bad. I’d love to point a domain name at a toaster. I’d love even more to get rid of NATs, since they are a nightmare for software to work with.