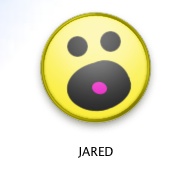 I didn’t even realize that this is still around. Back in the mid 90’s Jared was iconic for Mac users, distributed through the crazy folks at Freeverse. Apparently they kept it going for a decade. There’s a Mac OS X version, a Dashboard widget, and even a new iPhone Application.

That brought back some memories. The iPhone’s CPU even underclocked to 412Mhz is way faster than the PPC 603e @ 75MHz I used when I first damaged my ear drums listening to Jared. And that was a full desktop.

To see something this silly last so long is funny itself. I hope Jared has a job that’s not in the music industry. I wonder if he served as insporation for William Hung?

Bonus: You can find the lyrics, english translation, and a brief history of the song Luna de Xelajú on wikipedia!

I got my copy of Mac OS X 10.5 earlier this week. Bought it from J&R (via Amazon) since it was $99 + shipping, less than Amazon itself was selling it for. For some reason both of them are able to undercut Apple (even with a corporate discount) which seemed odd. Here’s my rundown of the new OS during the first 24 hours.

END_OF_DOCUMENT_TOKEN_TO_BE_REPLACED

Forget Konfabulator, forget Dashboard, forget Tcl/Tk. XULrunner will kill them all. As usual, it’s not planned to kill them. It’ll be just a side effect of the existence of XULrunner.

I agree, but with an exception. Konfabulator, and Dashboard have much better management of widgets than XULrunner appears to have (I’ve yet to see any documentation planning something better). XULrunner manages widgets more like Java. It simply doesn’t. It relies on the OS to do so. It’s purely a runtime.

If XULrunner could be run in a Dashboard type mode (run multiple widgets, background, be rather graceful and beautiful), and good installation methods to add widgets and manage them. It would be a killer app. Especially since it’s so portable and powerful.

But as a runtime (which is essentially what XULrunner is at this time), it’s not quite a killer. It’s apple’s and oranges.

I’d personally love to see the ability to run XULrunner in a “Dashboard mode” so that it managed XUL based widgets similar to how one of those other products manage widgets. That really would be an impressive feat. Perhaps that would be a great XULrunner app for someone to write. A portable, fast, lean XUL based Dashboard app?