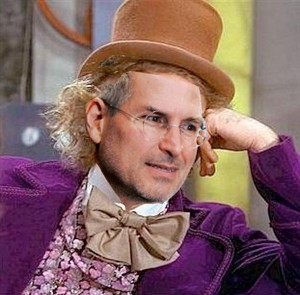 MacRumors is reporting that the new book Insanely Simple: The Obsession That Drives Apple’s Success mentions Steve Jobs was looking to do a Willy Wonka like promotion for the sale of the 1 millionth iMac.

I find this so hard to believe, but I so want it to be true. Apple in many ways is like Wonka. It’s secretive, nobody knows how the popular products come out, it’s founder was fanatic about privacy, secrecy and was without question a little quirky and eccentric. In many ways, Steve Jobs was like Willy Wonka.

Whomever would have went on the tour would have had one heck of an experience to talk about.

Steve’s idea was to do a Willy Wonka with it. Just as Wonka did in the movie, Steve wanted to put a golden certificate representing the millionth iMac inside the box of one iMac, and publicize that fact. Whoever opened the lucky iMac box would be refunded the purchase price and be flown to Cupertino, where he or she (and, presumably, the accompanying family) would be taken on a tour of the Apple campus.

Steve had already instructed his internal creative group to design a prototype golden certificate, which he shared with us. But the killer was that Steve wanted to go all out on this. He wanted to meet the lucky winner in full Willy Wonka garb. Yes, complete with top hat and tails.