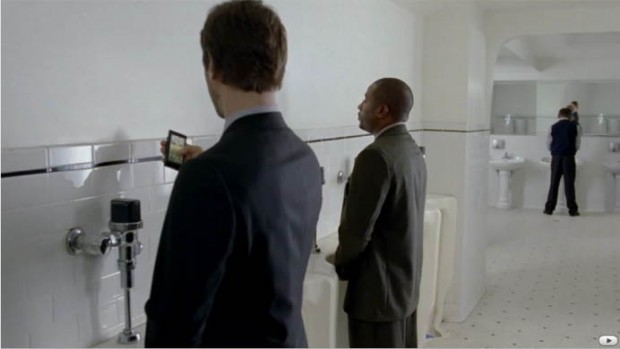 I really like this ad. Over the past 3 years or so this is what America has become.

Truthfully, I try not to use my phone when walking, talking, using the bathroom, at the table or other situations where it just seems grossly inappropriate. I think I’m one of the last holdouts. Given my inclination to prefer gadgets to social norms, this shows how far it’s gone.

Given this behavior skews even younger than me, I fear the worst is ahead of us.

L.G. did a mobile phone survey and found some interesting results about parents and teens:

Interestingly “41 percent of teens admit to sending, receiving, or forwarding a text that said something sexual” but 43 percent “engaging in some form of ‘sexting'”. I would think sending, receiving or forwarding would result in a much higher percentage. I can’t find any information about the methodology of the survey to help clarify this discrepancy.

Back in my day you had to draw yourself on a piece of paper and walk it over. When it resulted in laughing we called the return trip “the walk of shame”.

I suspect this is because someone else sees the bill.

An average bill for a heart attack was $45,000 in 2004. Assuming 7% annual inflation of health care costs that works out to roughly $67,500 in 2010. I believe the US health care inflation rate is actually higher that. It is estimated at 9% for 2010 alone. That’s conservative estimate.

Seems like it makes financial sense to put your teenage daughter under your cell phone plan. Your welcome kids. Feel free to show your parents the math and remember: you can’t put a price on health.

Last month I briefly touched upon the correlation between cell phones and toilets. My influence was coincidentally reading a story on third-world water sanitation a day or so before stumbling upon the cell phone statistics.

Now the UN is reporting in India more people have access to cell phones than toilets.

There are an estimated 6.8 billion people on this planet at the time of this blog post. There will be 5 billion cell phone subscriptions by the end of this year. Granted some people have several, most have 1.

To put this in perspective 884 million people in the world do not have access to safe drinking water (WHO/UNICEF [pdf]). The same report notes 2.5 billion “are without improved sanitation”. Roughly 1.17 billion (18% of the 6.5 billion population in 2006) still use “open defecation” or to put it in more crude terms, they crap in the woods, fields, streams, and rivers under the open sky.

There’s something a little disturbing about these trends. In my ideal world more people will always have access to toilets that don’t contaminate their own drinking water than use cell phones.

I mentioned back in September 2007 that cell phone manufacturers were looking to replace their varied connectors with Micro USB meaning most cell phones would use the same chargers and accessories. MacRumors points to a Reuters report that Apple has also agreed to go Micro USB in Europe, which presumably means the US as well.

I personally doubt Apple will just ditch the 30 pin dock connector in favor of Micro USB. I suspect Apple will either bundle a Dock to Micro USB adapter instead or add a Micro USB port next to the Dock connector. Among the many reasons:

Since the dock connector is really “USB+ Firewire + Audio + Video + Other”, a USB adapter is obviously cheap and easy to produce (they already ship a USB cable with all products). Hence I suspect there will be either a Micro USB adapter, or Apple will add the port to the bottom of the iPod/iPhone since Micro USB is very small.

There is still an advantage to having Micro USB. For one charging will become more universal across cellphones. This means car manufacturers, and even airplanes can offer Micro USB to let people charge phones easily via a single ubiquitous low powered interface.

It’s also more environmentally friendly since you’ll be able to buy your own separate higher quality power adapter. No more cheap bundled power bricks known for their phantom loads. Or just charge off your computer. You’ll also be able to use the same charger and accessories with more phones.

I am really glad to see the new Mozilla Mobile initiative. Mozilla 2 is a great time to undertake most of these changes. The thing that really sucks about developing for mobile devices is the browsers are pathetic at best (with the notable exception of the iPhone). Wireless speed is still an issue in some cases, but with 3G coming about, it’s not the biggest concern if you can manage to keep things slim. XUL on mobile will be very interesting. If done right, it would allow for client side applications that don’t suck, yet have the lowest barrier to entry (JS+XML = Easy). Not to mention you can target a bunch of devices with one download and code base. Don’t forget you’d still be able to do rather realistic debugging on your desktop.

Hopefully by the time this all comes around, data charges for mobile will drop significantly. The iPhone is still $60 for the cheapest plan. If you need more than 450 minutes of voice, you’ll be spending even more. While interest in the iPhone is high, between hardware and plan costs, I think it’s still to high to attract the masses. There’s still time. Firefox 3 isn’t even out yet. Mozilla 2 is still a little while away. I suspect these prices will be dropping as other providers try to compete with the iPhone. A price war is very likely.

One question remains: will it run on the gPhone?

Replacing a cell phone is one of the most insane upgrades ever. Not only do you replace the device (often with a new service plan for 2 years), but you’ve got to replace accessories in most cases, especially if you change manufacturers. Sometimes even the same manufacturer can have different connectors for the same accessories, depending on the phone model. Lets not forget the cost of these accessories. It’s a silly process. At least with computers most of your accessories plug in fine provided they are remotely modern (made within the past 4 years).

Several manufacturers including Nokia, Samsung, Motorola, Sony Ericsson and LG have now standardized on Micro USB meaning that future phones will use the same connection. Not only that, but it’s USB, so just like your computer. A few cell phones currently use Mini USB (such as Motorola cell phones). Micro USB is even smaller, which should be sufficient for a few years until cell phones become no more than a piece of paper. You can see a picture of various USB sizes here. Advantages of using USB rather than another standard include that it’s powered (meaning you can charge with it), is compatible with virtually all PC’s (meaning you’ll be able to charge your cell phone from your PC, or even transfer data if your cell phone’s software allows), and it’s pretty fast.

Having one standard means that like we see for Bluetooth devices, there will be a ton of options for consumers to choose between. Not just 1 data cable, a handful of charger, etc.

Of course that means pretty much everyone will need to buy Cell Phone accessories at least one more time. But hopefully when you do, you’ll buy ones that last.

If you have bluetooth on your phone, there’s yet another reason to turn it off when you don’t use it. Besides saving battery life (which is always a good thing), and just general security you’ll be seeing more and more spam as time goes on if you keep it on. It’s already a problem in some places. Here’s an auto translated version of the linked article in English.

It’s to easy to just spam cell phones with phone book entries, video’s, text messages, pictures, etc. Even if you don’t accept them, your phone will still go off to let you know you have an incoming request. I would bet it won’t take long befor apps exist for PDA’s to automatically spam any bluetooth device in range. Then a spammer can just walk through the streets, malls or stores to send spam. Talk about discrete marketing.

What a mess, and I doubt it will be fixed anytime soon. We’re still getting email spam with no end in site.

I haven’t had too much time to play with it. Perhaps later I’ll take a few test photo’s outside in daylight (if it’s not raining) and see how they look, and perhaps upload them.

I first setup bluetooth between my Mac and my phone, just paired them up. Took about 10 seconds. Then tried to do the same with my Thinkpad. Took about 2 minutes, thanks to slightly more confusing software (never did either). Next task was to transfer a picture from the phone to the PC. After about 20 minutes I had no success on my Thinkpad, kept being told “Sending Cancelled” by the phone. Went over to the Mac, and it took no more than 15 seconds.

Everything is easier on a Mac.

I haven’t had to much time to play with it, but here are some initial impressions: