Amid the din, Rooney’s buddy, an intelligence officer, shared an astonishing story. The day before, which happened to be Election Day, Army Air Force radar had detected the Germans launching a missile aimed at New York City from a U-boat situated several hundred miles out into the Atlantic. Fighter planes up and down the East Coast had immediately been scrambled.

The officer swore he saw the projectile being tracked on a machine at Mitchel Field in Hempstead, Long Island. It was traveling 250 miles per hour when it disappeared off the screen, either falling short of its target or being shot down by an alert pilot. The enemy’s attempted attack on New York had not come as a complete shock, he told Rooney. War planners had long feared that Adolf Hitler would use one of his Vergeltungswaffen (“vengeance”) weapons against the continental U.S. It was not outside the realm of possibility that German scientists had armed a submarine with a variation of a V-1 buzz-bomb or a V-2 rocket.

This is pretty fascinating in itself. The war could have taken a very different turn had Germany attacked NYC. But is it possible this was true and not just a rumor?

At least as early as 1942 the Germans were experimenting with the idea of launching a rocket from a submarine. That’s two years prior to Rooney hearing about such an incident. They clearly had an intent to do so but didn’t make it in time if the historical record is correct. That’s a big “if”. When wars end the victor has the ability to control what goes public and what doesn’t. As well documented as it was, lots of WWII details are still unknown for various reasons.

Many Americans don’t know this, but German U-boats weren’t uncommon off the US coast. Several were actually sunk by US depth charges during WWII: 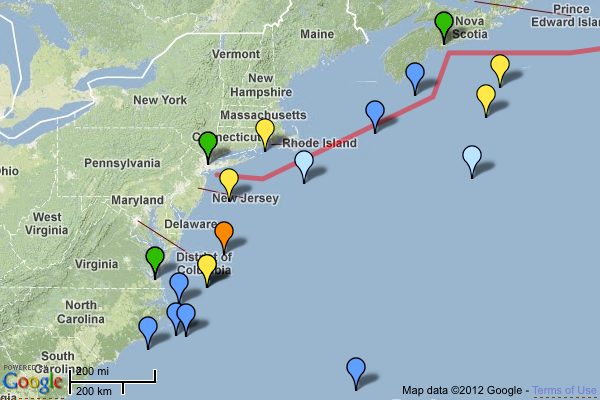 The green points are major cities, the dark blue were sunk in 1942, orange 1943, light blue 1944, yellow 1945. You can see it’s a fair number and they were within reasonable distance. U-869 is the yellow one closest to NYC was sunk by it’s own torpedo. U-521 was sunk by US depth charges as were some others.

To protect ships coming out the Delaware from Philadelphia there’s actually a bunker in Cape May, NJ dating back to WWII. It was part of a network to help fend off attacks to ships leaving from the coast with some big guns. It’s still there to this day.

Could a U-boat have been within striking distance? I’d say that’s a safe bet. We had primitive ways of detecting subs back then and we found some quite close. Surely a few got close that nobody in the US ever discovered.

Here’s another curious note from the article:

“I have heard from my friends that they launched the first projectile before they were caught but they don’t know what happened to it,” he told Rooney, speculating that the attacking U-boats had been “immobilized” by radio beams that somehow disrupted their electric motors. “They (the U-boat crews) couldn’t move and they were all captured alive,” he said.

This is curious but unlikely as the V2 would not likely have been vulnerable to anything radio. It’s was largely analog with a few gyroscopes. I would guess magnetic interference would cripple the V2 guidance systems more effectively than radio jamming. There was no data link like a modern weapon.

A year earlier (1493) was the alleged, and largely discredited Philadelphia Experiment. Perhaps the origin of that story was some technology developed for this purpose. When the war was over Wernher von Braun and many he worked with were brought to the US under Operation Paperclip. By keeping this secret the US would have effectively gained a huge win in military superiority. The rocket knowledge as well as how to defeat it. It would take some time before the Russians could figure things out. The conspiracy theory the Philadelphia Experiment created would have been an effective cover for any little bits that leaked out.

Even more likely is the weapon simply malfunctioned and the US (at least internally within the War Dept) took credit for it.

Overall this story seems plausible to have actually happened. It would make sense for the US to have wanted to keep it quiet as an attack on the US mainland would have been very concerning to so many Americans. Even today knowing that something came close would be an amazing revelation. If I had to take a guess, I’d say it happened, it malfunctioned and the details were mixed up in history.