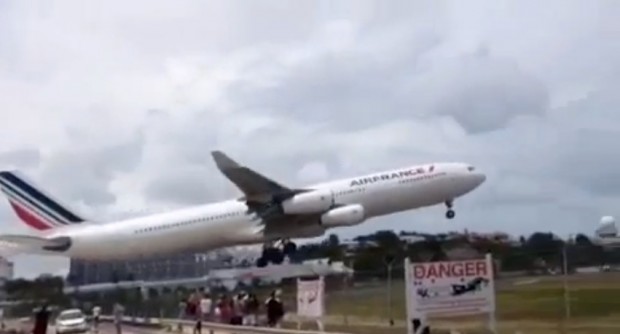 There’s video of an Air France A340 (guessing it’s an A340) performing a go-around at Princess Juliana International Airport (SXM), St. Maarten.

I suspect it’s wasn’t really the result of Hurricane Isaac, despite occurring when the storm was in the area and the video title suggesting. There’s nothing in the video to suggest wind was impacting the yaw or roll of the aircraft. The sea isn’t churning like the winds were really whipping.

As far as I’m aware, SXM doesn’t have ILS like many commercial airports. That makes things slightly more difficult in terms of establishing a glide slope (GS). The runway is 7,546 ft, not that short, however I’d bet the airline wants planes to attempt to touchdown earlier to allow for less reverse thrusters and save fuel in this economy. Especially for a larger plane like the A340 which will be burning a ton of fuel to climb out of that airport and get around those mountains. The go-around was likely the result of a slightly to steep GS. Ironically resulting in more fuel being burnt going around. Not terribly uncommon.