Value is the relative worth of a good. Water is worth nothing when it’s plentiful. It’s priceless when it’s in short supply. This is supply/demand. Companies are slightly different as they aren’t a commodity, there is only one Instagram. The supply is a constant meaning demand is what dictates value. The demand is based on how much another company (or companies) wants to buy it. This decision is based on how well Instagram’s assets, product line, employees, etc. would benefit them. It’s also based on how much it’s worth keeping away from a competitor, and how much it’s worth avoiding having another competitor. Distractions are costly for businesses. Mitigating them has difficult to quantify but significant value.

A basic company works like this: it creates a product with value that it obtained by customers (freemium products make things slightly more abstract, but this still applies). At some point the product runs out of potential customers either because the entire world who wants it has it (think: Facebook, Google), or customers just grow tired of it (think: Yahoo). The way a company keeps up growth is to introduce new products to add value to the company.

In a perfect world every product would achieve maximum potential and a company’s growth would be at worst a diagonal line, consistent and upward moving. or a curve moving upward at an accelerating rate. We know that’s not realistic.

The reality is most companies have lots of overhead when diversifying the product line. Not every product is a winner. The most notable example of this is Google. They have many products, to the point where I bet few if any Googlers know them all. Most however aren’t generating substantial revenue. Sergey Brin has been putting some effort into reducing Google’s product complexities because of this. Google. Apple famously reduced it’s product line when Steve Jobs took back the company and is highly profitable. Facebook has scaled reasonably well as it’s product can essentially be broken down to: communication (direct messaging, broadcasting), photo sharing, contact organizer. This on a graph looks something like this: 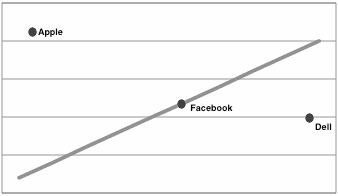 Getting back to the topic on hand, what is Instagram worth to Facebook? Facebook needs to keep on or above the line. That means they need to keep rapidly developing and improving products There’s a reason Zuckerberg put an emphasis on “Stay Focused & Keep Shipping“. Instagram was a distraction to Google. It was the only viable competitor to Facebook’s massive photo sharing business.

Instagram being bought by someone else could also be a distraction. Keeping it away has a similar value too.

Facebook has pretty much hit market saturation with its current audience. Facebook is having some trouble in some parts of the world where other social networks have taken hold. To keep growing that means they need to keep growing users. Obviously getting kids to sign up (once they turn 13 thanks to COPPA) is what Facebook needs to keep itself going. Instagram has managed to gain serious traction in the pre-teen market. These are kids who grew up with text messaging and photo sharing. Two of Facebook’s major product offerings. This is a major threat to their future. Why join Facebook and be observed by “friend” parents when you can use your phone (or iPod touch) and remain completely below the radar? Many of them have been doing this for a while now. All they need is WiFi (lots of free SMS apps in App Stores). The incentives to change workflow to Facebook have dropped. Switching over is hard anyway. Just because Child A turns 13 today doesn’t mean all their friends do. Being under 13 on Facebook means fearing being suspended constantly. Facebook purged 20,000 accounts daily in 2011. I’d bet that number is higher now.

These kids have a system of communication that works for them. It’s a very workable system. Facebook isn’t part of that system. That’s a big problem. Buying Instagram means they have a vehicle to convert these new users.

Instagram scaled quite well with a dozen employees and managed to build an app that makes photo sharing extremely simple and fun. The app’s workflow for photo sharing makes Facebook look terrible. Buying this up and integrating this is worth a lot to Facebook. Just like FriendFeed gave Facebook some serious engineering chops, this will as well. the Instagram team’s vision and expertise shouldn’t be discounted. Buying a company for its engineers isn’t uncommon these days.