Bruce Schneier pointed out that DNSSEC root key has been divided among seven people for security:

Part of ICANN’s security scheme is the Domain Name System Security, a security protocol that ensures Web sites are registered and “signed” (this is the security measure built into the Web that ensures when you go to a URL you arrive at a real site and not an identical pirate site). Most major servers are a part of DNSSEC, as it’s known, and during a major international attack, the system might sever connections between important servers to contain the damage.

A minimum of five of the seven keyholders – one each from Britain, the U.S., Burkina Faso, Trinidad and Tobago, Canada, China, and the Czech Republic – would have to converge at a U.S. base with their keys to restart the system and connect eveything once again.

Based on this key signing video it looks like they are using smart cards and an AEP Keyper HSM for this critical task. Schneier suspects it implements the Shamir’s Secret Sharing algorithm.

Considering how much our economy and our lives rely on the Internet these days, DNS is becoming a more and more critical part of our society. This is a very big event. No precaution is too great to ensure security of such critical infrastructure.

I’ve noticed the flies in Schiphol airport urinals the last few visits, but never knew their purpose. I admittedly didn’t put much effort into figuring it out now I know:

Fly into Amsterdam’s Schiphol Airport and, if you do what most people do after a long flight, you are probably headed to the lavatory. If you’re a guy, you’ll see that Schiphol’s bathrooms sports a feature many do not — urinals, with flies on them, as pictured right. Stare for a minute and you’ll notice that the fly doesn’t move. Look around, and you’ll note that the flies are everywhere — one per urinal, all the way down the row.

…It’s a target, plain and simple. Something for customers to aim at as they urinate.

This likely would not have been my first guess.

L.G. did a mobile phone survey and found some interesting results about parents and teens:

Interestingly “41 percent of teens admit to sending, receiving, or forwarding a text that said something sexual” but 43 percent “engaging in some form of ‘sexting'”. I would think sending, receiving or forwarding would result in a much higher percentage. I can’t find any information about the methodology of the survey to help clarify this discrepancy.

Back in my day you had to draw yourself on a piece of paper and walk it over. When it resulted in laughing we called the return trip “the walk of shame”. 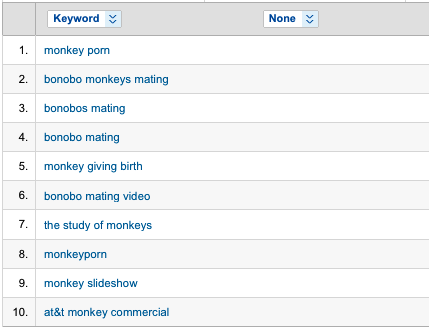 Total WTF search query in analytics: “how to install software in robert”

END_OF_DOCUMENT_TOKEN_TO_BE_REPLACED

I’ve mentioned Phil Plait and his awesome Bad Astronomy blog a few times here over the past few years. Way back when (early last decade) we were using the same web host and support forum. He’s now getting his own show: Phil Plait’s Bad Universe on the Discovery Channel.

I can also say that I remember him before he was actually famous.

Six items to wear is all a woman wore for an entire month as part of a “shopping diet”. What’s really interesting is that nobody seemed to have noticed:

Nearly a month into what amounted to just such a self-inflicted fast of fashion, Stella Brennan, 31, an insurance sales executive from Kenosha, Wis., realized last week that not even her husband, Kelly, a machinist, had yet figured out that she had been wearing the same six items, over and over, since June 21. The sad punch line is that Mr. Brennan is the one who actually does the laundry in the family.

It is possible people noticed but didn’t say anything within earshot. Her husband could just be a stereotypical male who doesn’t remember subtle details. I couldn’t tell you what shirt I wore on Monday (it’s now Thursday). However it seems more likely that nobody did actually notice.

Human memory is extremely complicated and not yet fully understood by science. This is generally considered to be an episodic memory. Unless you have Hyperthymesia, you likely only remember portions of your day that for some reason became memorable. Odds are you don’t know what color shirt the person sitting next to you on the bus was wearing, or the person in front of you on line was wearing this morning.

If Ms. Brennan had been in a situation where her clothing had either become a focal point or an accessory to an event or situation it would have been memorable. For example if someone noticed her shirt and complemented it. Another obvious situation would be if she had spilled something on herself in the presence of others. If she told someone very important news, they might remember what she was wearing when she told them the news. People can accurately recall seemingly small details from emotional events. That is a phenomenon known as a Flashbulb memory.

Self-consciousness is an interesting thing. What for one person is viewed as obvious and eye-catching might be completely ignored by others. We remember more things about ourselves than we do of others.

Most people these days seem to insist that all telecom (phone, internet in particular) go overseas by way of satellites. This however is far from the truth. There are actually many trans-oceanic cables and they provide most of the capacity. Mail Online has a great article about what goes into keeping the continents connected.

It’s a whole secret industry, partly for security reasons who in a low-key way keep critical communication between entire continents moving. Most people aren’t even looking at the water, they look up at the sky.

From Sarah Lacy’s TechCrunch post Conan O’Brien’s Love/Hate Relationship with the Internet is a very interesting insight from Coco:

O’Brien said the biggest thing that held him back from both writing and performing was a fear of being criticized because he’s incredibly sensitive. He punched a big hole in one of the biggest clichés in fame—that you just have to develop a thick skin. He says he’s still just as sensitive and criticism still hurts just as much. The secret is to just keep going anyway, because you will get criticized no matter how brilliant you are.

This is clearly something that’s gotten more pronounced in a Web age, but there may be a silver lining to that. In a time when every video, photo, blog post and Tweet can easily be trashed by others, people learn that criticism is inevitable early on.

The sensitivity to criticism I suspect is a motivator to O’Brien himself and I’m certain to others. It’s hard for it to not have an impact, even on the most jaded of individuals.

I think that has become true for anyone in any industry, not just night show hosts. To quote a movie title “We Live In Public” thanks largely to the Internet.

I learned long ago to take criticism and praise with a grain of salt. Neither are always genuine or accurate, especially on the Internet. Anonymity does make people more aggressive, but it also sometimes makes them more honest. Most people have a hard time giving criticism to you’re face even when asked to do so. It’s almost too easy when you can type it from a distance. Praise can have many false motivators that can often be hard to detect online.

It’s never “fun” to get a really nasty or critical blog comment, email, article, blog post written etc. about you or something you’ve done. This is especially true if you’ve dedicated a lot of time and effort. Regardless at some point you need to ask yourself: Is there any truth to this? Can I do something better? Once you’ve done that, it’s time to move on and plow forward. You won’t always be able to learn something, but that’s OK.

From my experience being a web developer, writing code that’s open source, and blogging means you’re going to get feedback, welcome or not. With certainty 100% of it will not be positive. Some will be negative, some will just be vile. Some however will be constructive. It’s to your advantage to use it.

Criticism and debate are a critical part of academia. Given programming’s still strong ties to academia, perhaps more so than many other industries may be why it seems so natural to accept for me and at least some of my peers. It’s like being graded in school. Or perhaps it’s because I started at about 14 or 15 years old as a developer. I got used to this sort of thing pretty early on during my formative teen years and it’s more natural for me. I guess I’m not really a true part of the trophy kids generation despite falling into the age group.