A little analysis/satire on all this Santa Claus stuff… Use caution around children.

I’m pretty sure Santa Claus wouldn’t be able to fly in the US. Despite being factitiously tracked by NORAD, I’m not sure his sleigh or reindeer would get airworthyness certification based on the categories available. For one the propulsion system seems to prone to problems (fatigue mainly). Secondly a sleigh can’t possibly be very efficient since it lacks wings for lift. As I recall that means more velocity would be required for flight due to the lack of wings (more on that later). This would but further strain on the propulsion system. Nobody wants a reindeer carcass falling on their roof.

Larry Walters got fined back in 1982 for famously flying a lawn chair with helium balloons. Keep in mind that’s not really powered flight. I’m pretty sure the FAA wouldn’t be thrilled about Santa Claus trying to pull a stunt like that in US airspace. He also couldn’t fly in certain areas like Washington DC which is restricted airspace.

OK, so Santa is well insulated with a red coat, hat, beard (presumably keeps his face warm) and body fat. But lets keep in mind the “lapse rate” in temperature as you move into higher altitudes. Air temperature drops as you get to higher altitudes depending on the amount of moisture in the air. 59 F at sea level with 29.92 in.Hg atmospheric pressure the temperature drops 3.56 degrees F for every 1000 feet (source). That means at an altitude of only 7,500 it’s freezing. That doesn’t account for wind chill either. Remember Santa needs a fair amount of velocity as I mentioned earlier.

Then lets just spend a second on Santa’s hat. Nobody seems to get this right. The Haddon Sundblom (think 1930’s Coca-Cola) popularized images of Santa have him wearing a red cap with a loosely hanging “tail” feature and a white ball at the end. This is impractical when you consider the wind as this thing would get Santa pretty annoyed flapping about. The alternative Sinterklaas style hat isn’t much better either. It’s pretty much a giant spoiler. Surely neck strain would bother Santa after just a short while. 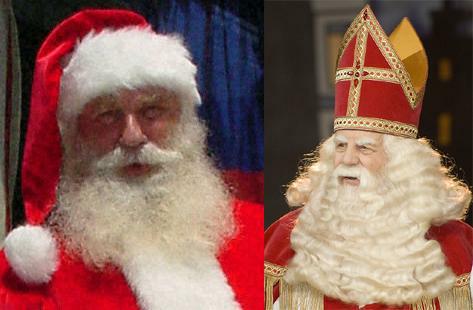 More appropriate headgear would be a traditional leather helmet and aviator goggles popular in the early days of aviation.

Keep in mind even the Spirit of St. Louis was enclosed to protect Charles Lindbergh from the elements while flying over the Atlantic.

Then lets not forget about landing on peoples roofs. Besides for technically trespassing (we’ll assume property owners don’t mind) he’s also using roofs as runways. Some roofs are short meaning he has little time to get to the minimum takeoff speed (again little lift on a sleigh). This seems especially problematic in places where there are obstructions such as buildings.

Besides, it doesn’t seem economical to take off and land just across the street, a matter of feet away. This is the same barrier than the Segway has faced. Getting on and off of the device constantly takes away a lot of the utility and efficiency. It would be more practical for Santa to fly into town then just go door to door. Or better yet: use UPS or FedEx. At the quantities he ships he’d get a pretty decent rate, and avoid the PETA folks who certainly don’t like the reindeer being abused and would avoid FAA fines.

Lets not forget what a morbidly obese man, sleigh filled with presents for the world and reindeer weight. There are many roofs that wouldn’t handle this load.

Don’t get me started on navigation. Most roofs I’ve seen don’t use ILS meaning he’s likely using line of sight to land. Inclement weather would make visual navigation impossible at times. You also never hear of Santa getting snowed in or delayed due to poor conditions meaning he’s either reckless or could teach the FAA and the airline industry a thing or two about keeping flights on time.

If I told you that I was going to start a charity in a remote region and only hired short people with pointy ears, long noses, and pointy hats and dressed them in green, you’d look at me funny. If I told you they would make all the toys I give out and take care of my propulsion system (reindeer) all year-long in some sort of Utopian agreement you’d be contacting the International Labour Organization and organizing a boycott. Somehow the big guy with the beard gets away with this. Often these elves are depicted as children who are several hundred years old. That’s right child labor.

We’ve all heard of this supposed list Santa keeps. He allegedly knows if you’ve been naughty or nice. Nobody ever questions how he acquires this information. Should he really be privileged with all this information regarding children? People fear MySpace and Facebook which are relatively easy to control in comparison. Imagine what pedophiles would do with Santa’s naughty list.

Every house in 1 night? Granted thanks to the earths rotation he’s got a full 24 hrs assuming he travels from east to west with the night. This still seems highly impractical. Christians who celebrate Christmas aren’t spread out evenly across the globe meaning his load is consolidated rather than evenly spread. When you account for the oceans which are sparsely populated as well as the far east which has a lower density of Christians… this doesn’t seem very easy to pull off. He’d have an OK time over Russia but he’d really be struggling in the Americas. 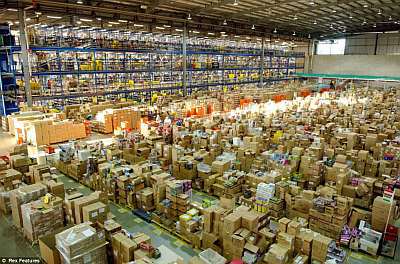 Mere physics says he can’t possibly be fitting everything into one sack. The image is just Amazon’s UK operations as shown on Mail Online (I recommend reading). That’s a tiny piece of one country’s gifts. Surely Santa would have back problems. Again flying all of this around the world zig zagging wouldn’t make much sense. If anything making several stops back in the north pole would be more practical. Remember he has to zig zag anyway to cover the whole world during darkness putting him near the north pole every few hours anyway. Doing several pickups would mean less weight and more speed.

We all know Santa is “heavy” and Mrs. Clause wants him to watch his weight, but lets think about this. If you follow the famous Nestle Toll House Chocolate Chip Cookies recipe you will yield 60 cookies. 1 cookie is 110 calories, 3 g saturated fat, 15 mg cholesterol, and 85 mg sodium. One serving (8 oz) of skim milk is approx 80 calories and 120 mg sodium.

Using CIA World Factbook data we can extrapolate approximately 78.5% of Americans are Christians and census data tells us there are aprox. 129 million housing units in the US. Assuming an even spread that makes about 101 million homes for Santa Claus to visit in one night.

Assuming 1 cookie and 8 oz of skim milk that would be 190 calories per household or 19,190,000,000 calories consumed in just the United States alone. That’s of course assuming everyone offers him skim milk.

If you use the rule of thumb that a 180 pound person burns 100 calories per mile and weight x distance = energy used walking and we assume Santa is only 500 lbs that’s still only 270 calories a mile. That means Santa would have to walk 71,074,074 miles to walk off the cookies and milk.

That’s beside the fact that consuming that much food is impossible for anyone without 8 stomachs (ALF reference). We’re also ignoring the increasing weight the reindeer need to pull as the night goes on.

Santa Claus just flies in and starts his deliveries. He doesn’t seem to stop at the border and show his passport. He doesn’t seem to apply for a visa or declare what he’s bringing into the country. Nor is any tax being paid in countries where applicable. His imports bypass customs. I’m pretty sure this breaks the law in most countries for illegal immigration and possibly tax evasion.

I’m starting to question all this. Don’t even get me started on his age. Seems like this guy is over promising quite a bit. Consider me suspicious 😉 .

2 replies on “Santa Claus And Logic”

Have a look out for ‘Can Reindeer Fly?: The Science of Christmas’ by Roger Highfield – http://www.amazon.com/Can-Rein.....753813661/ It discusses this sort of thing at length.

Taxes and Immigration…. you’ve figured it out! It’s all a front for a smuggling operation. Now all of the snow imagery starts to make sense… A “white” Christmas, indeed!