As reported by Neowin.net, Microsoft now supports Windows Genuine Advantage for Firefox. You can check this by visiting this page and getting the plugin. This will make it easier to download from Microsoft’s site. Microsoft earlier in the year fixed another issue blocking some Firefox users. It’s great to see them taking steps to fix the web. The majority of reports on their domains are now aesthetic, and of course windows update.

The plugin installed is:

Update: More info can be found on the IEBlog. 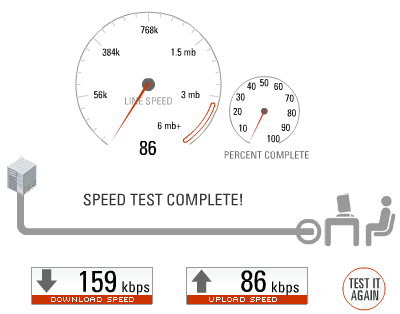 Most people think I’m joking when I say my school has absolutely pathetic bandwidth. Yes, that’s the result of the best of several speed tests. You don’t get much more sorry than that. And sadly, it gets much worse around finals week as everyone goes online at the same time.

Took a little time today to do some AJAX programming. So cool. I’ve got some neat stuff here. Hopefully in coming months I’ll be showing some of it off.

Well, that’s about it for now, a little busy with school work.

On Monday, I decided to see if Ubuntu’s Live CD was good enough to work for the week. I put the CD in, rebooted, and said “no Windows until Friday”. Surprisingly, it recognized all the hardware in my Thinkpad T43 (at least all that I cared enough about to notice), and actually did a good job. With 1.5GB of RAM in this monster, it was rather smooth once it loaded. My only gripe is that it didn’t have an easy way to save the session to a USB flash device on shutdown, and allow it to re-init based on that session next restart. If the Live CD was smart enough to do that, it would have been truly perfect.

OpenOffice did the trick, as did Firefox. Really had no issues at all. Printing worked, so did networking.

Live CD’s are definitely useful. Find a computer that doesn’t work in a lab? Just put in the CD, and you can use it without problems.

Really says a lot for Linux. Ubuntu is definitely a great distro, the best I’ve seen so far. Now if I had a bigger hard drive, I’d have a partition for it. Eventually I will… I hope.

Believe it or not, Microsoft does have a tool for mounting iso files on Windows (similar to Apple’s ability to do so with Disk Images). No need to burn the iso to access the file. The download is here. Note the UI is ugly and somewhat undocumented, but it’s not to hard to figure out. Open the program, load the driver, then mount your image file. It’s unsupported, but it works. Hope this helps others wondering how to do this. No need to buy anything fancy.

Looks like things are delayed for several days. The biggest issue is not freezing the Thunderbird UI during the sync. Boris Zbarsky was kind enough to take a stab at getting threading going, but that doesn’t look like it’s going to work out. I’ve got another approach in mind, thanks to David Bienvenu, but I’ve yet to get that worked out. In addition to that, I’ve got enough going on that I don’t have the necessary time to code/debug that right away. This is still a hobby and not a job [shameless plug I’ll be looking for one this summer], so please be patient.

So earliest possible timeframe is some point next week. More realistically is 2-3 weeks, because there are several things (of various sizes) I would like to actually do before I start with some testing. Rather than a release I’ll likely take a few beta testers reading this blog (so keep reading if your interested), and expand from there based on feedback.

For those wondering, I will be supporting Lightning, though likely not until there’s more integration with Thunderbird. I’ll judge that as we go along. Lightning support is still in question. Having two instances would be rather awkward, both polling for the iPod device. Something that just shouldn’t happen. Not to mention Sunbird is still somewhat early in development. I’ll evaluate that as time goes on, based on demand, and Sunbirds development.

It’s great to see so much support for this project. It’s more than I actually expected to see.

ColdFusion has a problem dealing with XFN. When using ColdFusion client side validation invoked by <cfinput required="yes" />. ColdFusion should generate JavaScript to validate the form on submission. This typically should be between in the <head /> somewhere. When using the profile attribute of the head tag <head profile="http://gmpg.org/xfn/11" > for XFN, ColdFusion apparently doesn’t detect a <head /> tag, and therefore dumps the contents above the <html> tag. This is wrong for two reasons:

Does not show the bug:

Ideally, ColdFusion would sniff the DOCTYPE and generate the appropriate output, for it’s JavaScript in XHTML using a CDATA.

but perhaps that’s asking to much.

FYI the server that demonstrated this is running:

The new iPod sync extension is so simple that besides the options GUI (which most people will never need to touch), this is the only UI a user will ever see.

First release will likely be Windows only, but Mac support is easy once I get things stable. I just don’t feel like debugging on two platforms at once (reformat iPod each time).

The Safari update in the Mac OS X 10.4.3 update passes the Acid2 Test. Congrats to the team on that effort. Hyatt originally noted the development on his blog back in April. This is the first official release that passes Acid2. The relevent Mozilla bug is #289480 (unnecessary comments in that bug will get you spanked; as timeless notes it’s just distracting).

The Safari blog is a great read for anyone interested in browsers, web development, or apple software development. Some great minds at work.