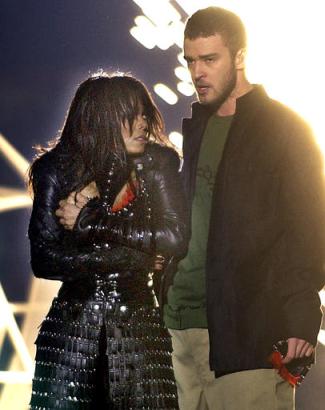 4 replies on “Janet Jackson half off at Half Time”

CBS and the Super Bowl committee should be fined for the display that Janet Jackson and Justin Timberlake made at the Half-Time program. It is a disgrace what this country has allowed on our television sets — This is in the Name of Entertainment — What will be next, as the TV Networks have lost control over what is put in front of our families. What a Shame. The Howard Sterns, the Soap Opers showing everyone in bed and partly nude and the Spears/Madonna antics are getting disgusting. And to top it off, HOWARD DEAN – Quote – Thinks this is all silly, and he wants
to be the President of our Country. May God help
us.

What ever.. get over yourself.. I think america and american are way over prude and should look towards europe for guidance… America – Land of the religious freaks!

I DONT THINK THEY THOUGHT THAT WAS GOING TO HAPPEN BUT IT DID AND I DONT THINK YOU PEOPLE SHOULD SAY THINGS ABOUT IT. JANET SAID SORRY FOR WHAT HAPPEN AT HALF TIME AND THAT SHOULD BE THE END OF IT. IAM A JANET JACKSON FAN.

After all that, I’ really disapointed that JJ is no longer perky… we are all getiing older, alas.